Two card games from Italian game publisher dV Giochi are now available in English editions. In Deckscape – Test Time, an escape room themed game, one to six players are tasked with solving puzzles in order to make their way out of a locked laboratory as quickly as possible. With 3 Secrets, two to eight players attempt to reveal three mysteries surrounding an informant to be able to solve a case. Both games have just been released in Europe and set to arrive in North America soon. Deckscape – Test Time and 3 Secrets each carry an approximate MSRP of $11.99. 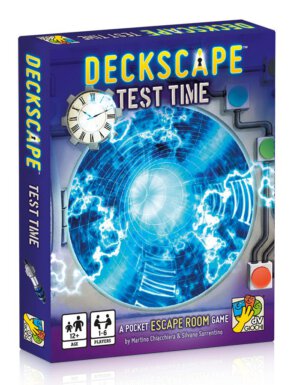 Deckscape –Test Time is the first title in a series of cooperative games inspired by real Escape Rooms, where a group of people is “trapped” inside a room full of puzzles and odd items.

The goal of the game is to solve puzzles, understand the plot of the story, and make intelligent use of the items provided in order to exit from the room as quickly as possible.

In Deckscape –Test Time, you have been selected from Doctor Thyme’s most brilliant students for a special project. He’ll test your skills, and if you succeed, you’ll get a unique chance to help him on his newest and greatest invention. While he his explaining his project, he distractedly pushes a button: an alarm cries loudly and heavy gratings shut all the windows and the exit door. The laboratory is locked! Doc Thyme falls through a trapdoor below his feet and the lights turn off. Will you be able to pass Doctor Thyme’s exam and exit his Laboratory? Using just 60 cards, you will take part in a hectic adventure, without leaving home.

The English edition of Deckscape –Test Time has just been released and it is now available for the European market. 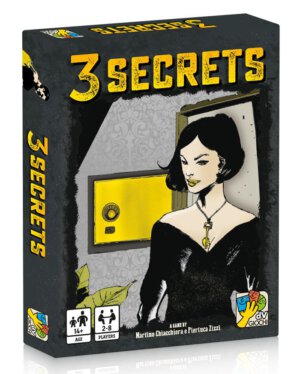 The English edition of 3 Secrets, a cooperative game for 2 to 8 players, has just been released and it is now available for the European market.

The goal of the game is to unravel the three secrets of an unresolved case before time runs out.

One of the players plays the role of informant, and knows the truth about the case: they know which secrets need to be discovered, and try their best to help you guess them correctly. The clock is ticking and the clues are scarce; question the informant to gather useful information to find the solution. If you grope in the dark, the informant can reveal an important clue, but this will cost you precious time! Use your best observing eye, lateral thinking, and deduction skills to unravel all the mysteries of the ambiguous characters that populate this game.

3 Secrets comes with a free app available for download at the Apple AppStore and Google Play.