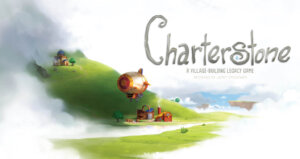 Jamey Stegmaier has certainly made a great name for himself in the gaming industry, in a relatively short time, both with his designs and how Stonemaier Games marches to their own drummer. Now a new Stonemaier game will be heading our way and it sounds very unique to say the least. In Charterstone, one to six gamers will begin playing without ever having to refer to a rule book. Over the course of a dozen games (each taking about an hour to play) the gamers will make a variety of choices to create a one of a kind, fantasy worker placement game.

Also of interest is how you’ll be able to get your hands on Charterstone. The game isn’t taking to Kickstarter nor will Stonemaier Games take preorders. You’ll only be able to buy Charterstone through your FLGS or online retailer. No details yet as to when we’ll see the release but the game, for ages 10+, will carry an MSRP of $70.00.

The prosperous Kingdom of Greengully, ruled for centuries by the Forever King, has issued a decree to its citizens to colonize the vast lands beyond its borders. In an effort to start a new village, the Forever King has selected 6 citizens for the task, each of whom has a unique set of skills they use to build their charter.

In Charterstone, a competitive legacy game scaled for 1-6 players, you construct buildings and inhabit a shared village. Building stickers are removed from cards and permanently added to your charter on the board, becoming action spaces for any player to use (kind of like Lords of Waterdeep and Caylus). Thus, a few available buildings soon grow into a bustling village with dozens of actions.

Your journey through Charterstone’s many secrets will last 12 games, but it doesn’t end there. Your completed village will be a one-of-a-kind, variable worker-placement game.

Charterstone will likely be ready for release in 2017.