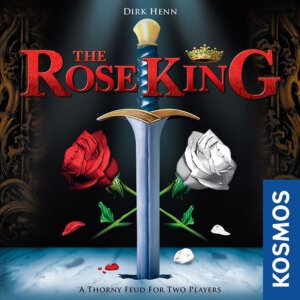 The Rose King, designed by Dirk Henn, is a two player strategic area control game of The War of the Roses and each player takes the role of the rival combatants: the Houses of York and Lancaster. The game appears to be a bit of a card driven affair (or at least card dependent) as each faction aims to gain the support of various contiguous provinces while also sending their knights to wrest power from their enemy.

If you win the war you, my friend, will be crowned king of England.

The Rose King will carry an MSRP of $19.95 which leads me to believe this will be a rather light and abstracted strategy affair. 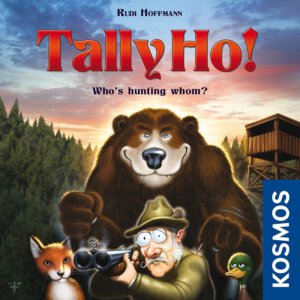 Tally Ho! is actually an older title (1973 originally) being reissued and is aimed at casual gamers and younger players. Designed by Rudi Hoffmann, this two player game sees forest animals flipping the script on a group of hunters and lumberjacks. Both sides are actually trying to get their hands on some tasty ducks but nothing is stopping them from hunting each other either.

Tally Ho! was part of the Kosmo Two Player line and will return with an MSRP of $19.95.

Both The Rose King and Tally Ho! should be your favorite U.S. based FLGS sometime in March, 2016.