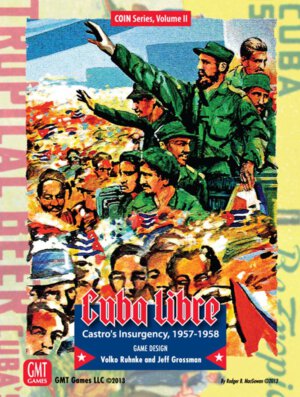 Players: One to four

Playing Time: Two and a half to three hours

TGG Inside the Box

Cuba Libre is the second title in GMT’s counter insurgency (or COIN) line of games, following Andean Abyss, and tackles the years of revolution on the island of Cuba. The game covers the years 1958 and 1959 as four factions compete to control the government. Players can take on the role of either Fulgencio Batista’s government, Fidel Castro’s 26th of July movement, the Directorio, or the U.S. mob otherwise known as the Syndicate. While a full complement of four players provide for the best gaming experience you can play with as few as one as flow charts are included to dictate the actions of nonplayer factions. 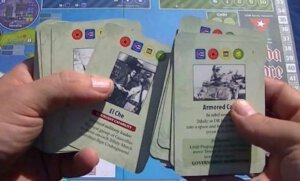 There’s a bit of discussion whether the COIN series can be considered wargames or not. The same discussion also applies to one of my favorite games out there as well, GMT’s Twilight Struggle, and I have to admit these titles are more game than straight simulation so I’m firmly in the non-wargame camp. These are still great titles though and deserving of attention from even the staunchest grognard.

I think it’s worthy to note opening the box leads you to discover the high level of components we’ve come to expect from the gang at GMT. It’s really to the point where the only mention of components from this company should be on the extremely rare occasion where they’re a touch lacking because about 95% of the time everything is first rate! I also love the fact we get the usual rule book as well as the additional playbook including loads of card info, examples of play, and historical background.

Play in Cuba Libre is card driven as the 52 card deck provides players with the options of playing the event depicted or performing an Operation instead. As in Andean Abyss an interesting aspect of the gameplay is each faction can’t act on every turn; If you choose to do something in one turn you’ll have to pass in the next. Each of the Event cards also displays the turn order for that turn so who goes first, second, third, and so on will vary. 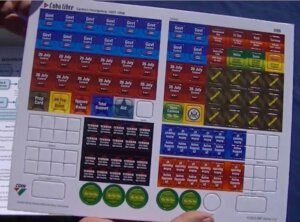 Each faction also possess asymmetrical Operations they may preform, ways of gathering resources, and victory conditions. This doesn’t mean taking the role of one faction over another means having to relearn the game but you’ll find it much different winning while sitting in Castro’s shoes that it is leading the Mob. This also means all four players aren’t necessarily always at each other’s’ throats the whole game and you’ll find yourself in strange alliances from time to time in order to forward your agenda while possibly helping an opponent as well.

The action in Cuba Libre really is down and dirty as factions perform Assassinations, Bribery, Infiltration, Kidnapings, and other sorts of vicious Operations against each other. All while trying to build their power base and bring the support of the populace to their side of course. No one plays nice and all parties involved have plenty of blood on their hands.

As the game continues through the Event deck you’ll encounter four Propaganda cards which trigger the Propoganda Rounds. These rounds are points in the game where victory conditions are checked, as well as some in game house cleaning and resource gathering will be completed, but if any faction (or factions) has achieved their required conditions they’ll win. If no one is declared the winner you’ll continue to play until the fourth Propaganda card is revealed and then whoever is closest to, or even beyond their requirements, pulls off the win.

I really got a bang out of Andean Abyss but the truth is I like Cuba Libre better. This is saying a lot since I gave AA a 9.1 and I’ll explain why I feel this title is a better game. In Cuba Libre the setting is much smaller and each faction is in direct conflict with opponents right off the bat. While AA had a bit of 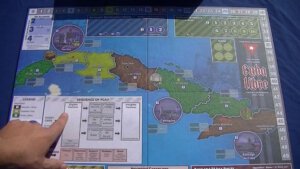 a ramp up, here you’re into the fray from the start. Also the game plays faster, with fewer Event cards, so there never seems to be a point where the game is dragging on. Once you have the rules down (and there’s really only ten or so full pages of rules) and a couple games under your belt you and your friends should be able to finish a game of Cuba Libre in around two to two and a half hours.

Lastly, and this might sound a bit strange, I think there’s more appeal (especially for American gamers) with the Cuban revolution than the late 20th and early 21st century strike in Columbia. Most Americans at least have an inkling of Castro’s rise of power in Cuba although no doubt not an extensive understanding – the Cuban revolution hits close to home but not too close.

One complaint I’ve heard from some folks is the fact that since everyone’s forces are displayed right on the board there isn’t much fog of war. I completely understand the knock, and it’s especially valid in a game focused on insurgency and counter insurgency, but I honestly don’t feel it’s a huge problem because, as I stated earlier, Cuba Libre is more game than sim.