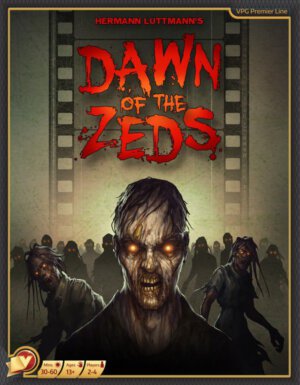 Players: One to four (five in versus mode)

Playing Time: 60 minutes and up

Those who’ve read my reviews of the previous two editions of Dawn of the Zeds (DotZ) know I’m a huge fan of Hermann Luttmann’s original game design and I’ve been eagerly anticipating getting the third edition of DotZ to the table. Following a highly successful Kickstarter, Victory Point Games outsourced production of the new edition which promised upgraded components, expanded gameplay, and multiplayer to what had previously been mainly a solitaire affair. Let’s see what VPG has pulled off…

If you aren’t familiar with DotZ, the game tasks the player(s) with the defense of the town of Farmingdale (and its surrounding suburbs) from an ever increasing threat of a zombie menace. The defenders need to hold out until the National Guard arrives. Yet if our stalwart heroes can’t fight back the waves of undead and the Zeds reach the town center? Then it’s game over!

As you can see from my Outside the Box video, VPG has done a really nice job with the components for DotZ; counters and markers which really pop, solid artwork, a sturdy dual sided game board, well presented cards, and six (you read that right!) rule books. The rule presentation has been broken up into the separate books to facilitate easier learning although I’ll have more to say about that in just a bit. 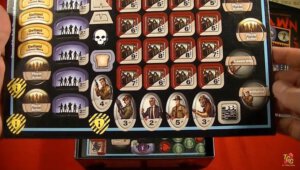 I’m not going to rehash a ton regarding game play seeing the third edition hasn’t changed tremendously, in essence, from earlier incarnations. For the most part DotZ is driven by two decks of cards: the Event deck and Fate deck. Events are drawn each turn to determine if new zombies appear on the board, how many actions the heroes may perform, which track/tracks the zeds advance upon, if supplies need to be expended, and – thus the name – what sort of event takes place. You might not draw from the Fate deck each turn but you will if an Event card indicates the need. These Fate cards add more events, possibly more Zeds, and occasionally a card you can save to use later in the game.

Throughout the game you’ll be tasked with fighting back the undead (and possibly other enemies nearly as deadly) with the help of heroes, citizens, and special groups; i.e. the Farmingdale fire department, the police SWAT team, and even the local roller derby team. All the while you’ll be trying to get the fleeing populace to he relative safety of Farmingdale before they become Zed chow. You’ll have to use your available actions wisely and hope you find yourself blessed by good dice rolling to survive the onslaught. Various levels of play also add loads of options and gameplay wrinkles guaranteed to create an epic tale of survival against all odds.

The additions to the third edition are mainly positive. Players now have a slew of heroes to choose from to defend Farmingdale as well as a new mix of dastardly anti-heroes to try and thwart. You can attempt to research a cure for the virus or even develop a super weapon to use against the Zeds. Super Zeds have special abilities which make them quite difficult to wipe out. Keep in mind too that gamers can also custom tailor the game to suit their desired level of difficulty and time investment. 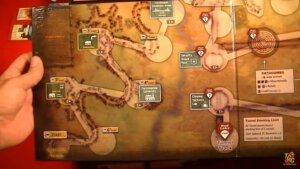 The inclusion of multiplayer is a big selling point for Dotz Third Edition but I have to point out it wasn’t exactly impossible to play earlier versions with friends; since heroes, citizens, and special groups receive actions you could simply split control of the defenders between the players. Obviously, there weren’t specific rules regarding this previously but clever players could make it work. The new DotZ is firmly entrenched as a multiplayer game now – which is still excellent solitaire – and there’s even a “versus” mode where one player controls the anti-heroes and influences the Zeds.

While DotZ remains an excellent game there are a few aspects which mar the title a touch.

I know I complained about the Tunnel Track (which appears on the map in the higher difficulty levels) in the second edition as being more trouble than it’s worth; heroes can get lost, Zeds can get lost, you’re rolling dice to see where they end up on the track, and so forth. The complaint remains with this edition too. I like having yet another track the players have to worry about, thus stretching their defenses even thinner, but the rules to implement the additional route still come off as a bunch of screwing around without a lot of payoff.

Second, I certainly appreciate the folks at VPG aiming to make learning DotZ as easy as possible. The purpose of all those rulebooks is to gradually introduce the players to more options and gameplay concepts. Sadly, the execution is off a bit as all these books end up making DotZ come across as much more convoluted than the game turns out to be. It doesn’t help that a rule you may think is located in one book turns out to be found in the pages of another. 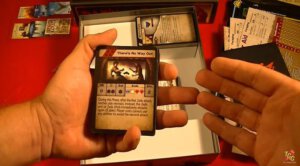 Personally, I recommend reading the A to Zeds book before diving into the game. This happens to be where all the rules are contained, although not completely spelled out with examples of play. I’m not saying you need to study it as if you were prepping for an exam but give it a skim through. Once you’ve done that, then pick up the booklet for getting started and read it cover to cover. I believe you’ll have a much easier go of it by doing things this way.

Lastly, I don’t think the original designer had a whole lot of input with the third edition of DotZ. Granted this is only an observation but, even though Hermann Luttmann’s name is right there on the box, I don’t get the Luttmann vibe from the proceedings; the first edition played like a well oiled machine and then later, while the second edition added a lot of new options, a bit of clunkiness appeared. This third edition almost has an “everything but the kitchen sink” feel to it. I’m not saying I don’t welcome these new additions to the game but the integration of some of them don’t come across as seamless as they should.

Don’t take any of the above to mean DotZ isn’t still a fantastic game though!

I have to mention I happened to be keeping an eye on my niece and nephew one afternoon when I asked my fifteen year old, video game obsessed nephew Cameron if he’d like to check out a zombie board game. Let me point out that I can probably count on one hand the number of board/card games I’ve been able to coax Cam to try over the years. Since he also happens to be a big fan of The Walking Dead, I had a feeling he might give DotZ a go and he agreed to play. A couple hours later, once we’d successfully defeated the Zeds on the Outbreak (easier) level, Cameron couldn’t stop raving about the game.

Flash forward and now I happen to be watching the kids for the weekend. This time Cam has a friend (Alex) from school over when he takes a break from the Playstation 4 to ask, “Hey Uncle Jeff? Do you have that zombie game with you?” I just happened to have DotZ in my car so I broke it out. A couple hours later yet another non-table top gamer fell under the sway of a board game. The next day we rinse and repeat with another friend (Hunter) with essentially the same results. 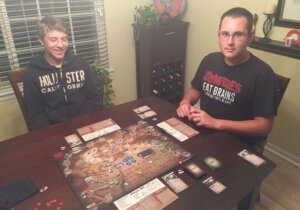 It has to say something about a game when you can have three teenagers, who have little to no experience with board games and seemingly can’t survive more than ten minutes without something splashing across a screen in front of them, sit down for over a hundred and twenty minutes completely entranced by the experience. I was tickled to death by the cheering and groaning throughout the games as the card and dice gods wove the heroes’ fates.

As I wrap up I’m sure those out there who already own either one (or both) of the earlier editions of Dawn of the Zeds is wondering if the new offering is worth a purchase. I have to feel if you purchased the original zip-lock game then the third edition is a must buy; all the extra gameplay options and really sweet components should lead to a no-brainer order. For those with the second edition the decision may not be as clear cut. If you play DotZ solitaire on occasion – and you don’t really care much about the components, additional heroes and villains, or multiplayer – then you can probably get by with what you already own. I think you’ll be missing out but I can’t definitively say you MUST get the new offering. Then again, if you play DotZ quite a bit and want your friends and family to take part in the action? You owe it to yourself to grab the third edition.

You say you’ve never played DotZ? Let me put it to you this way…

These days you can’t swing a barbwire entwined baseball bat in your FLGS without knocking at least three or four zombie themed games off the shelves. Truthfully, the genre has been done to death over the past few years. Or maybe I should say undeath? Regardless, there are some excellent/pretty good zombie games out there and there are a ton of titles which are complete dreck. Since its 2011 release, DotZ has always been one of my favorite zombie related titles to turn to when I want an extremely solid challenge. While I may have a few minor quibbles with the new edition, Dawn of the Zeds remains one of the best titles in the genre and belongs on nearly every zombie gamer’s table.

Dawn of the Zeds remains one of my go to games when I want a solidly challenging battle against zombies. The new edition has raised the bar as far as presentation and the sheer number of options for playing the game while adding multiplayer. Although I have a few minor issues with the latest offering, DotZ still packs loads of fun and action.

Score Big Savings with the Tiny Dungeons Bundle of Holding