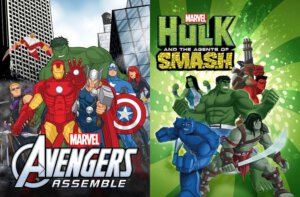 Two new Marvel cartoons are set to hit small screens and the official premiere dates on Disney XD have been announced. May 26th will see the arrival of Avengers Assemble featuring Iron Man, Captain America, Thor, Hawkeye, Black Widow and Falcon in a one hour special preview before finally settling into its normal Sunday morning slot on July 7th. Led by Iron Man (Iron Man? What about Cap?!?!) the team will face a myriad of formidable foes torn right from the pages of your favorite Avengers comics. Adrian Pasdar, of Heroes fame, leads the Avengers voice cast.

Marvel’s Hulk and the Agents of S.M.A.S.H. will take its initial bow on August 11th to complete the Marvel triumvirate programing block alongside Ultimate Spider-Man and Avengers Assemble. This series will see Hulk, She-Hulk, A-Bomb, Red Hulk and Skaar together as a team looking to tackle menaces too large for puny human sized heroes. Included in the voice cast are fan favorites Eliza Dushku and Seth Green.

So stay tuned true believers as this Summer your Sunday mornings are going to be a lot more action packed!