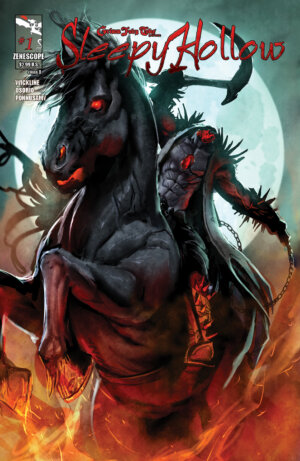 Some big releases this month from Zenescope. Some have already been released and some will be coming out on the 24th.

This new bi-monthly series features characters from the Grimm Universe in never before told stories. Issue #1 ties directly into the 2012 annual and the Grimm Angel One-Shot. As the Flesh Reavers descend on the people of earth an unlikely alliance forms between a trio of Highborns who have only recently discovered their powers. In order to save the humans they defend…and themselves…they’ll have to master their powers in the heat of a life or death battle without any margin for error.

A brand new series straight from the Grimm Fairy Tales Universe. The Highborn Gods of old have been biding their time, waiting for the right point in human evolution to make their return. Some have waited with nothing but good intentions and the desire to help the people of earth. But not all the deities from the past have such altruistic plans. One fallen god has set her sights on a much loftier and more sinister goal…the enslavement of all mankind.

In the small town of Tarry Town, New York the story of the headless horseman of Sleepy Hollow has become something of Myth and Legend. A legend that is about to become all too real. When a prank goes deadly wrong those responsible will learn the truth behind the legend as the Headless Horseman returns to exact a horrifying revenge that none will ever forget. From the writer of Salem’s Daughter: The haunting comes a tale of horror and terror that will leave you on the edge of your seats. Hold on to your hats…and your head.

Allen learns from the gypsy who cursed him the means by which he can remove the spell but the price he must pay in order to do so may prove to be too much to bare. A price that will have to be paid in blood by the one person Allen loves more than any other. The one person who is immune to Allen’s amazing powers. His ex-girlfriend. The conclusion to the supernatural thriller that reinvents the classic Love spell story by the company that does it best. 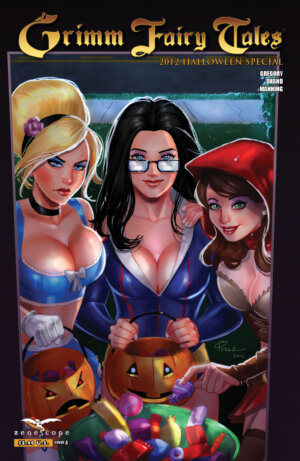 The annual horror event of the Grimm universe returns here with five brand new tales of terror that will shake you to your very core. When a group of teens visit a deserted cornfield in search of good time they will find that fear has a face and terror has a brand new name. Enter The Sinister Scarecrow! Plus two other all new short stories in this can’t miss issue that has become a Halloween tradition.

Sela finds herself at her lowest point yet when her actions find her locked in solitary confinement. With nowhere to turn but within Sela must reflect on the events that have brought her to this horrible place and uncover the mystery of the true identity of the highborn hiding within the shadows of the prison walls itself.

From the writer of the smash hit Grimm Fairy Tales Jungle Book!

Hank is captured by the sinister force that dwells within the witches den leaving Gina to fend for herself against an age old evil intent on devouring their very souls. But little does the entity know of the incredible powers at Gina’s disposal that could save or destroy them all. The final chapter to the epic Hansel and Gretal story arc. Featuring two incredible homage covers as Zenescope celebrates its seven year anniversary. 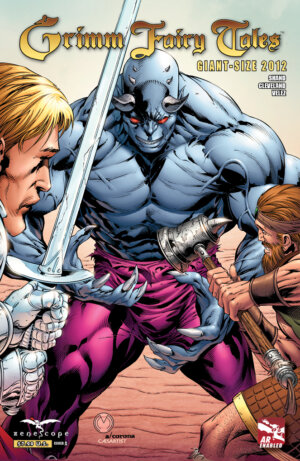 The CANNOT miss Grimm Fairy Tale book for the year is here! In the land of Myst Blake The White Knight and Boulder the Dwarf have begun their journey to reform the council of the realms on an epic adventure that will take them to the farthest reaches of Wonderland, Myst, Neverland and OZ itself but as they search for those who will replace the previous members the Dark One’s most loyal general Orcus is also searching for an item of incredible power to resurrect his long murdered Queen and when these two forces collide the face of the the Grimm universe will change forever. The EVENT book of the year that sets the stage for the future of the Grimm Universe and the realms of power with an ending you have to see to believe!!! Featuring the return of a character that will have every Zenescope fan talking!