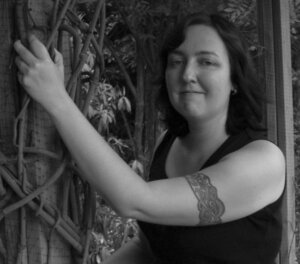 The Hugo Awards were announced on September 2nd and the winner for best graphic story  is Ursula Vernon’s Digger, which is available in web comic form online as well as in print, published by Sofawolf Press.

Digger is a story about a wombat. More specifically, it is a story about a particularly no-nonsense wombat who finds herself stuck on the wrong end of a one-way tunnel in a strange land where nonsense seems to be the specialty. Now with the help of a talking statue of a god, an outcast hyena, a shadow-being of indeterminate origin, and an oracular slug she seeks to find out where she is and how to go about getting back to her Warren.

With an irreverent sense of humor and a fantasy protagonist with a healthy dose of skepticism, Digger rapidly gained a huge following of devoted fans eager for the twice a week updates of the webcomic. This volume collects the first two chapters of the story, along with an all-new six page comic revealing the origin of the talking statue of Ganesh. Digger has long received acclaim from fellow artists and webcomic critics.

From the news release:

Ursula Vernon, author of the popular children’s book series “Dragonbreath,” has won the Hugo award for Best Graphic Story for her comic “Digger.” 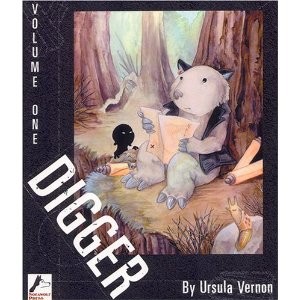 “Digger,” a comic about a practical wombat trapped in a quirky fantasy world, began in 2003 and concluded on the web in 2010. Sofawolf Press, an independent publisher based in Minneapolis, MN, packaged and published the comic in six print volumes, the last of which was released in summer 2011.

In its early years, “Digger” won several webcomics awards for its distinctive black and white art style, and its print presentation earned Vernon a nomination for “Talent Most Deserving of Wider Recognition” in the comic industry’s Eisner Awards in 2006. Of her Hugo win, Vernon says, “I’m so honored and grateful to see my little wombat bring home a Hugo. Thanks to everyone who made Digger a success.”

Sofawolf Press, a small press specializing in publications featuring anthropomorphic animal characters, began publishing collected volumes of “Digger” in 2005. Founded in 1999, Sofawolf Press has published over sixty books, graphic novels, and magazines, and is currently considered the longest-tenured publisher of exclusively anthropomorphic literature. The Press’s publications have received 21 Anthropomorphic Literature and Arts Association (Ursa Major) awards since its inception, but this is its first Hugo award. CEO Jeffery Eddy says, “We always knew Digger was exceptional, and it is our pleasure to have played a part in presenting it to the wider community and giving it the recognition it deserves.”

The Hugo Awards are the popular awards for the field of science fiction and fantasy. They are awarded in a ceremony each year at the World Science Fiction Convention (WorldCon), which this year was held in Chicago, Illinois. In 2009, the World Science Fiction Society, which administers the Hugo Awards, added a category for “Best Graphic Story,” to be presented for five years as a trial to evaluate the breadth of content in that category in science fiction and fantasy. At the World Science Fiction Society’s meeting this weekend, the group voted to remove the five-year sunset clause and make the award for Best Graphic Story a permanent part of the Hugo slate.