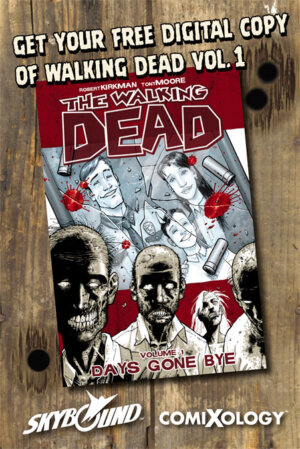 If you’re planning on attending the Baltimore Comic-Con this weekend be sure to stop by the comiXology booth (#1403) to score your digital copy of The Walking Dead Volume One absolutely free! Ok… If you’re one of the first 500 people to run over to the booth that is…

This weekend comiXology — the revolutionary digital comics platform with over 75 million comic and graphic novel downloads through iPhone, iPad, Android, Kindle Fire, Windows 8 and the Web — returns to Baltimore for the 13th annual Baltimore Comic-Con! ComiXology will be giving away free digital comic codes for The Walking Dead Vol. 1 at their booth (#1403) during this year’s convention taking place on September 8th & 9th where comiXology will once again be sponsoring the annual Harvey Awards.

Following the wildly popular promotional giveaways at WonderCon ’12, Emerald City Comicon ’12 and C2E2 ’12 earlier this year, comiXology is teaming up once again with The Walking Dead creator Robert Kirkman’s Skybound, to make this year’s Baltimore Comic-Con unforgettable for comic fans by giving them a free “taste” of the first graphic novel — regularly $8.99 for 140 pages — that the hit The Walking Dead TV show is based on.

This time around the first 500 Baltimore Comic-Con attendees to come by comiXology’s booth (#1403) will receive a limited edition promotional postcard imprinted with a unique download code redeemable for The Walking Dead Vol. 1 exclusively on comiXology.com in exchange for an email sign up.

In addition to the must-have The Walking Dead Vol. 1 giveaway, comiXology will be providing hands on demonstrations of the comiXology digital comics platform at their booth all weekend long. Fans should not miss their chance to get a look at the new 3.1 iOS upgrade that includes the new CMX-HD digital comics format for the new iPad.

All Baltimore Comic-Con attendees are invited to join comiXology co-founder John D. Roberts alongside Power Play artist Reilly Brown and Valentine creator Alex De Campi for the “Creating Comics the ComiXology Way” panel on Saturday, September 8th at 1pm in Room 302-303 to discuss how comiXology is transforming not only how people read comics, but how people create comics.