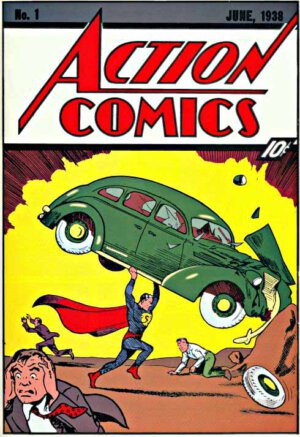 Yes today marked the 75th anniversary of the first issue of Action Comics rolling off the presses for Detective Comics, way back on April 18th, 1938 – making this as good a day as any to celebrate the birth of the last son of Krypton. It would be hard to imagine the future comic books would have been without the two Cleveland area Jewish kids and their concept of a hero who was faster than a speeding bullet, more powerful than a locomotive, and able to leap tall buildings in a single bound! No doubt many of our favorites today such as Batman, Spider-Man, the X-Men, Wonder Woman and thousands of others would either be much different or – much more likely – not exist.

As much as I’ve been less than a fan of how the folks at Warner Bros. and, by extension of the parent company DC Comics, have treated the families of Jerry Siegel and Joe Shuster over the years I’m still happy the duo were around to set the framework to entertain countless millions around the world for the last seventy five years. Plenty of other writers, artists, and editors have expanded upon the Man of Steel’s legacy but for my money if it weren’t for those two cocksure Ohio kids and the runaway juggernaut Superman created we’d be a whole lot poorer (or richer if you consider how much money you’ve spent on comics over the years) culturally without the pure joy great superhero comics can provide.

For being seventy five years old you still look fabulous, Supes! Although it really is time you invested in a comb. 😉