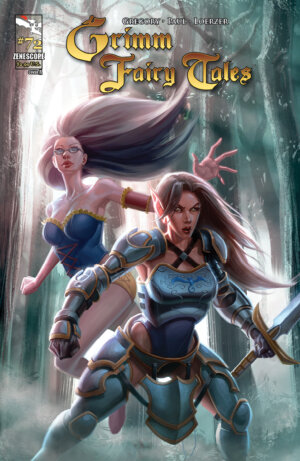 There are only five days left to back Zenescope’s Grimm Fairy Tales Animated Series Project on Kickstarter. They have over $125,000 in pledges, but need to reach the $175,000 mark in order to be fully funded.

Zenescope has added some new incentives as the project enters the home stretch. At $30.00 they have added $30.00 of back issues of  Zenescope comics, plus the Core Package. The core package includes a digital copy of the animated series with additional behind the scenes footage, a digital copy of volume 1 of the Grimm Fairy Tales trade paperback (issues 1-6), a limited edition key chain, Grimm Fairy Tales wallpaper, and a thank you in the credits.

At $50.00 you’ll get $50.00 worth of back issues, everything else listed above, a DVD of the animated series, and a Kickstarter exclusive printing of volume 1 of the trade paperback.

For those with the cash, at $1,500 you can get a voiceover spot on the series. This is the one I would go for if I could, plus you get all of the other incentives above it. There are only nine openings left at this level.

At $3,500 you’ll get a personal private lunch with the creators of the Grimm Animated Project: Joe Brusha & Ralph Tedesco, Director Jon Schnepp, Producer Ben Jackendoff, and a screening of the pilot in LA (travel & flight not included).

There are a ton of exclusives at every level of pledge, if you like the comics that Zenescope publishes and want to help them to expand into a whole new arena (and gain a bunch of exclusives) then now is the time to head on over to Kickstarter as it is almost over.

Here is the video description of the new exclusives available: