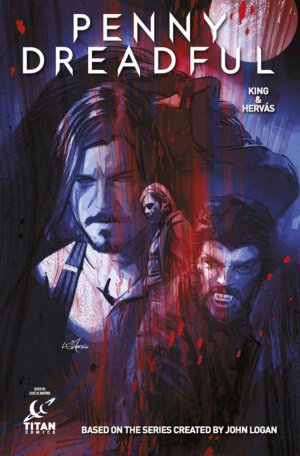 Fans of the recently concluded (cancelled?) Showtime gothic horror mashup Penny Dreadful will be happy as Titan Comics launches the first issue of a new ongoing series. Penny Dreadful: The Awakening picks up six months after the events of the TV series. The comic carries a cover price of $4.99 and hits your FLCS today. Here’s more about the series, and a trailer, from our friends across the pond…

The comic series takes place six months after the ending of the TV show’s final season. Ethan Chandler finds himself unable to move on. As he searches desperately for meaning in a world without Vanessa, ancient words echo across the centuries, and he is called on once again to take up arms against the creatures crawling out of the night.

As a producer on the Penny Dreadful Showtime original series, how does it feel to bring the characters to new audiences with comics?

I love all these characters and the world we created so much that I am thrilled to have it continue for a whole new audience. I look forward to both our fans and the new audience discover the magic and intrigue of Penny Dreadful.

Titan’s Penny Dreadful is a brand-new series, picking up six months after the colossal events of the series finale. What can you tease about Titan’s new comics?

Many of the audience’s favorite characters will be returning throughout the comic series. We hinted at some many different story areas that we never go to fully explore in the TV series so it’s been great to go back and explain some of the mysteries we left unsolved. One big tease is that old lovers will reconnect once again.