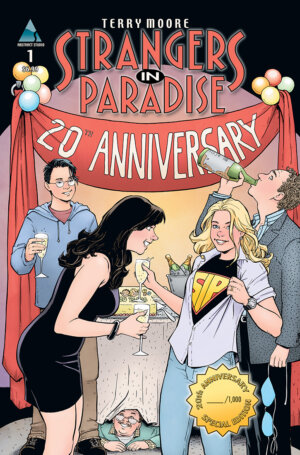 I’ll guess most visitors to TGG already know I’m not the most traditional comic book reader out there as that’s more my brother Greg’s forte; even though I love a good superhero series as much as they next guy my tastes have always veered a touch off the beaten path. One of those paths I’m eternally grateful having taken is that of reading Terry Moore’s Strangers in Paradise, a (mostly self-published) series which ran from 1993 through 2007. Strangers in Paradise  – or SiP as we readers refer to the series – is a tale full of love and loss, indecision and determination, damnation and redemption, laughter and tears as well as small moments of intimacy and big far flung reveals.

As I’m quick to tell folks, my two favorite comics are SiP and Eric Powell’s The Goon. Sure, both distinctively different sorts of series but they share a common attribute: a damn near truckload of heart! There are plenty of titles out there which have great art or excellent stories but rarely do you run across a title which incorporates both while also bringing to the table that extra something which demands you give it a read.

In my opinion, if there’ a comic book which can be coined as perfect Strangers in Paradise must be it. Not to take away anything from Moore’s excellent Echo or the currently ongoing Rachel Rising either, as those are both fantastic reads too. My friends I’m telling you Moore is a wonderful storyteller and artist bar none and if you aren’t familiar with his work you are surely missing out. Outside of a tiny bump here and there, the SiP arcs are tightly woven into the overall storyline framework and fabulous artwork adorns each and every panel. Honestly, I’ve been a longtime fan of pinups and good girl art and Moore captures the female form in ways which celebrate everything those of us who love women are drawn to – no pun intended – without ever coming across as voyeuristic or exploitative.

Don’t get me going on what I like to term as “pervy art” and I’m certainly not a prude as I’m someone who’s always thought Olivia’s art is fantastic. I don’t mean to imply Terry Moore utilizes nudity on any great scale in any of his comic series, just to mention Moore firmly has his finger on drawing women realistically appealing. Yet, even with the phenomenal artwork, if the characters in SiP were one note or simply stereotypes the comics would have been banished to the nether regions of memory. You know like the answer to a query along the lines of, “What the hell was the name of that comic where…?” 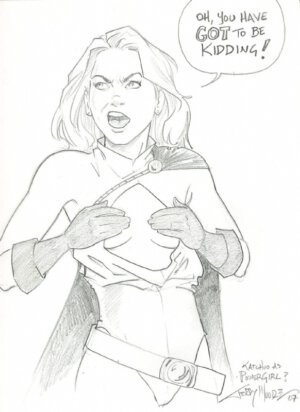 Readers know I stay away from spoilers since I don’t want to walk on the buzz someone gets when they first get a chance to sink their teeth into something great. If you’ve never read SiP I’m not going to take away from your enjoyment of the roller coaster ride ahead of you. I will mention when the series was ongoing I was lucky to have jumped aboard around the issue #45 mark or so. By then there’d already been some trade paperbacks and, since I kept hearing from those in “the comic book know” this was something I had to read, I picked up I Dream of You and It’s a Good Life. After reading those I swung by the comic shop the next day to grab The Collected Strangers in Paradise as well as the other trades alongside the most recent issues which hadn’t been collected yet. This is the same approach I’ve used over the years to introduce my non-comic reading friends to the genre; sharing a couple of trades so they could dip their toes in the water. I always point out SiP isn’t all about caped crusaders and there are loads of movies pals have seen they’d never have guessed were based on comics or graphic novels so the comic medium isn’t just literature for dummies or some equivilent.

As mentioned I’d always loan out the first two trades of SiP to friends and, never fail, in a day or two I’d get a call or email asking when I could loan out the rest. At one point I was making pickup arrangements for the latest issue to make its way through a circle of eight readers (outside of myself) since none of my friends felt comfortable walking into a comic shop to buy it themselves. On top of that I’d be fielding tear filled cell calls to recap the latest developments in the story. I didn’t mind those calls since Terry Moore had brought me to tears on more than one occasion through the SiP run and I enjoyed the discussions about life and love which those comics became the impetus. Plus, after someone was hooked on SiP, I could drop a mention of other titles my friends might be interested in checking out.

Over the years only once did anyone pop out an odd – yet not negative – comment about my love of Strangers in Paradise. Although my friend enjoyed the series she was surprised I enjoyed a comic focused on two lesbians. I was a bit surprised by that (and truth be told a tad disappointed) and responded if she thought the focus was on lesbianism she was missing the whole point; sort of like someone thinking at the core of The Walking Dead is only zombies… 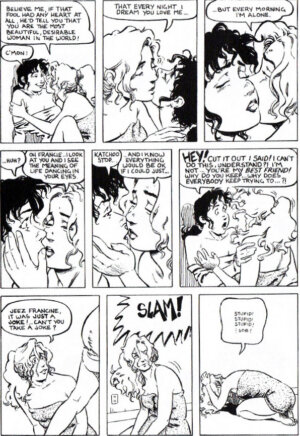 I can only say if you’re a comic reader and haven’t picked up Strangers in Paradise you owe it to yourself to do so. I equate any self-respecting comic fan who hasn’t read SiP the same way a person who tells me they’re a true film buff yet has never seen Citizen Kane or Casablanca; Seriously? No joke?! Are you yanking my chain?!?!?! The story of Katchoo, Francine and David – alongside Casey, Tambi, Freddy, Darcy and the rest – is one you need to sit back and savor for a good long while; I bust out my trades every few months to devote an afternoon or evening to revisiting the series. If you’re like me you might find yourself thoroughly entranced and handing out your trades to anyone who’ll give them a peek. Granted, your books and issues will be all beat to hell like mine but you’ll have a smile from ear to ear knowing you turned people on to something which they’d never had possibly taken a peek.

If you’ve never been a reader of comics I will doubly recommend you to give a look at Strangers in Paradise. We aren’t talking about men and women with superpowers but living breathing characters who don’t leap from the page but more sift into your consciousness; I was sad when SiP came to an end because the characters held attributes each of us can identify with as human beings. It was if you knew you were going to say goodbye to good friends which you’d only get to interact with in that odd sort of “Facebook commenting on photos” sort of way because they were thousands of miles away. I can happily say Terry Moore understands the power of SiP better than any and continues to release prints and artwork of the characters and it was announced at SDCC 2012 the Strangers in Paradise story isn’t over as there’s a novel in the works. Better yet, a new Strangers in Paradise omnibus is available this month which collects the entire SiP run and it’ll only run you $100. This includes a slipcase and an original print. Seriously? Right about a buck an issue, a slipcase, AND a print?!?!?!

You’ve got to grab that! No joke people, even if you’ve got every issue of SiP the omnibus looks to be something special! 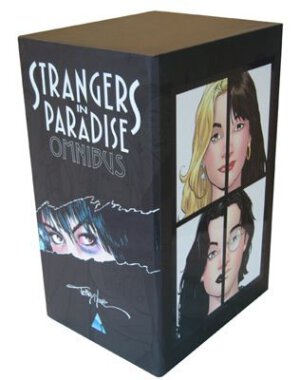 On a final note, one of the two things on my agenda I knew I had to do at SDCC this year was to say hello to Terry Moore. Last year we’d been approved for three press passes to the show but, as a lot of you know, I wasn’t able to attend. Since this was going to be my first jaunt to Comic-Con International I’d already explained to Tony, during our late night run to pick up passes on Wednesday, I was going to track down Abstract Studios to at least say hi to Terry Moore. Unfortunately Tony got socked with food poisoning late Thursday night – normally the first day at a show I always get my bearings to plot out a gameplan for coverage and lay the framework for interviews we haven’t already scheduled – so I flew solo for the rest of the con. Yep, it’s always some wrench in the works.

I know damn well the TGG coverage of SDCC 2013 is going to be the worst of any show we’ve ever attended as members of the press; don’t be surprised if we aren’t asked back in 2014 but I has hell bent to say hello to Terry Moore to say thank you for creating a comic which resonated with not only myself but my friends and hundreds of thousands of other readers. Knowing Terry wasn’t going to spend the majority of his con time hanging at his booth I found myself taking a pass on other things which no doubt would have better served our website but was still determined to say hello. Visitors already know I’m pretty upfront about goings on behind the scenes and I have to say I wasn’t concerned if I screwed the pooch with SDCC as long as I could meet Terry Moore; I think a lot of our regulars dig the site because as much as we take being members of the media seriously our hearts still beat juts like the rest of the fans out there.

Thankfully I finally did swing by the booth while Terry was hanging out and spoke to him for a couple minutes. Of course I dropped a business card and mentioned even though comics aren’t the selling point of TGG I’d love to put together an interview in the future either by phone or Skype. Keep in mind I know cons are “go time” for independent artists and creators so I never push to grab an interview on the spot since A) folks who aren’t part of the gaming community have absolutely no clue who we are and the kind of numbers the site pulls across all genres and, B) if they’re at their booth, the time talking to me could be better utilized talking to people who spent their hard earned money on attending the show. Let’s hope Mr. Moore doesn’t visit TGG and think we’re a bunch of dopes or not worth his valuable time.

Regardless, I was so happy to have spent a few minutes personally chatting with Terry Moore and simply being a fan. I’m sure if Terry had a nickel for every person who told him how much they love his work it would have been he buying Marvel as opposed to Disney but I still wanted to share my appreciation. Even if we never get to have Terry join us for the patented light-hearted and fun TGG interview I’ll still consider meeting him as a highlight of SDCC 2013! 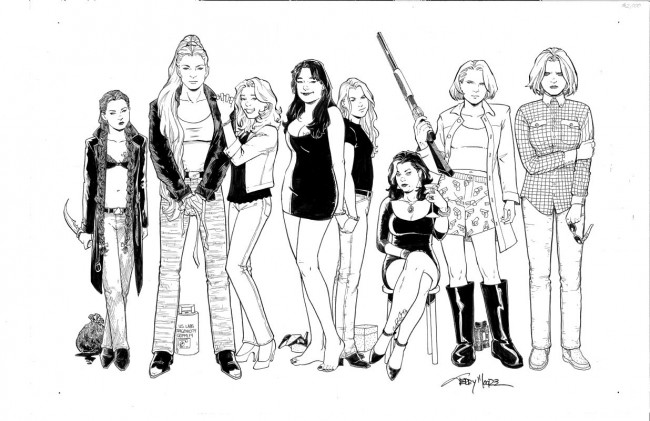