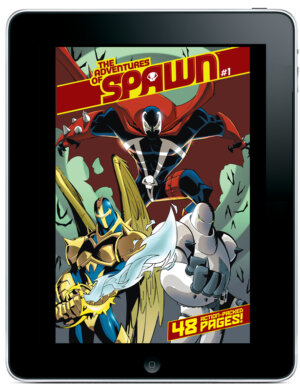 The folks over at comiXology continue to expand their digitally available titles and the newest series to debut is Todd McFarlane’s The Adventures of Spawn. It’s a little hard to believe there used to be a Saturday morning Spawn cartoon (seeing the nature of the central comic) but this Image series is very kid-centric and family friendly overall.

Image Comics and Todd McFarlane Productions are excited to announce the digital debut of THE ADVENTURES OF SPAWN a kid-friendly comic series now available on the revolutionary digital comics platform comiXology. Two 48-page issues of THE ADVENTURES OF SPAWN, as well as a collected edition of both issues with bonus material never before seen in print, are on sale now across the entire comiXology platform including the iPhone, iPad, Android, Kindle Fire, and the Web!

Kid-friendly and in the colorful, action-packed style of Saturday morning cartoons, THE ADVENTURES OF SPAWN originally premiered as a webcomic on Spawn.com and was collected into print trade paperbacks in 2007 and 2008. Filled with pulse-pounding battles, betrayal, revenge, and the clash between the Forces of Light and the Forces of Darkness, THE ADVENTURES OF SPAWN is the title for parents to share their love of SPAWN with their children — and for them to sneak a moment of fun-filled adventure, too.

“It’s fun is to see if your characters can fit into different settings, genres, mediums and/or formats – as a means to get your idea in front of more new eyes,” said McFarlane. “Unlike the regular title, this one is truly built around the word, ‘adventure.’ It’s a world of Spawn unlike any of the others I’ve populated.”

Todd McFarlane Productions’ THE ADVENTURES OF SPAWN features exciting stories by Jon Goff and eye-popping art by Khary Randolph. Bonus character bios drawn by various artists, including Greg Capullo, are available only in the collected edition.