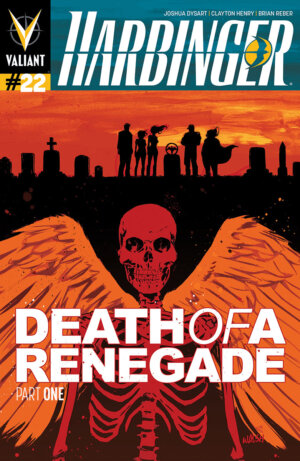 The Valiant universe will never be the same when Harbinger #22 arrives in comic shops April 23rd. Our friends at Valiant have provided the following preview to whet your appetite.

Valiant is proud to present an advance preview of HARBINGER #22 – the FIRST ISSUE of DEATH OF A RENEGADE, a devastating new turning point for Valiant’s acclaimed superhero series from New York Times best-selling creators Joshua Dysart (Harbinger Wars, Unknown Soldier) and Clayton Henry (Harbinger Wars, Incredible Hercules)! Peter. Kris. Flamingo. Torque. Zephyr. Anyone can be killed – and, on April 23rd, one of the Renegades’s own will begin an inescapable collision course toward the ultimate sacrifice.

“It’s not hyperbole to say that EVERYTHING will change after this,” Joshua Dysart told USA Today. “People say that, but in the past we’ve proven that we mean it. And this time I think people will be very surprised as to what’s going to happen in this book.”

Jump on board the series that The Onion/A.V. Club calls “the crown jewel of Valiant’s line-up” with DEATH OF A RENEGADE, on April 23rd in HARBINGER #22 – the opening chapter of the most important Harbinger story ever told…and the beginning of a milestone moment that will define everything that follows in its wake.