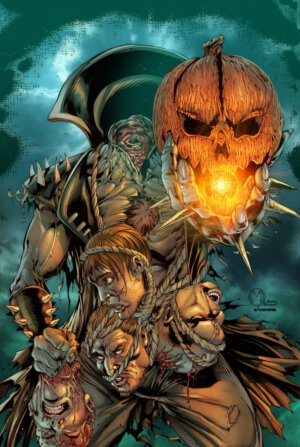 Zenescope Entertainment, the company known for re-inventing classic tales as horror and thrillers, has announced plans to release a new Grimm Fairy Tales spinoff comic book series.  This time the story of Sleepy Hollow will receive the Zenescope remake and is scheduled for an October release date.  The mini-series is written by Dan Wickline (The Adventures of Sinbad, Call of Wonderland) with story by Zenescope’s Joe Brusha, Ralph Tedesco and Raven Gregory.  Cover art for issue #1 is by Marat Mychaels and Matt Triano, and interior artwork for the series will be handled by Allan Otero (Salem’s Daughter: The Haunting, Grimm Fairy Tales).

Zenescope Entertainment’s Sleepy Hollow takes place on campus of the fictional Tarrytown University in upstate New York.  The story of the headless horseman has become something of myth and legend but it’s a legend that is about to become all too real when a college prank goes deadly wrong.  Those responsible will learn the truth behind the legend as the Headless Horseman returns to exact a disturbing revenge that none will ever forget.

“I’m very excited about taking on this project,” states series writer Dan Wickline. “If you think about it, Sleepy Hollow is the starting point for a lot of the horror out there today. It was the first story to use the basic premise that we see in slasher films and the blueprint to many of the unstoppable anti-heroes we have today.  I call them anti-heroes because deep down inside most of us are rooting for the killer when we read or watch these kinds of stories.  With this series I want to do what Zenescope has become famous for doing, taking classic tales told to children and turning them up to eleven.  I get to crank up the fright and it should be a hell of a ride.”

Dan Wickline has left his mark on previous Zenescope titles, including the current Call of Wonderland mini-series, the Grimm Fairy Tales: Sinbad spinoff and many of the popular Tales from Wonderland comics.  His work has always been very well-received by Zenescope readers and this series should prove to be no exception.

Sleepy Hollow #1 hits shelves in October in time for Halloween and is available for order in this month’s Diamond Previews.  Go to Zenescope’s website at www.zenescope.com and Facebook page www.facebook.com/Zenescope for more information.