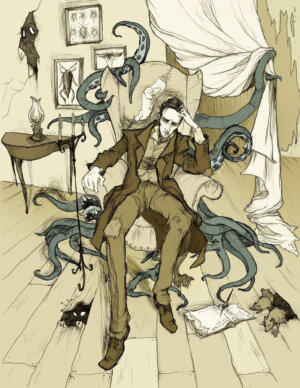 I thought it would be appropriate to celebrate the 123rd anniversary of the birth of who many consider to be the daddy of modern horror stories – myself included – with an mp3 I’d originally put together for a friend. She’d never heard of H.P. Lovecraft, and since I knew she was also a fan of audio books, I took some episodes of a nightly SF/Horror show which used to air on BBC Radio 7 (now Radio 4 Extra) which I’d gotten my hands on a few years back.

For the life of me I can’t remember the name of the show, and I don’t have the original downloads, but the program would air new productions alongside rebroadcasts of old BBC programs of yesteryear; every night you’d get an installment of each tale they were tackling.

This is probably my favorite production of the famous novella ‘At the Mountains of Madness’ and Richard Coyle does a masterful job in tackling the story. Neil Gardner’s production and sound design are top notch as well with an effective, if minimal, score and incidentals which make this come across more like an audio drama as opposed to someone simply reading a story.

If you live in the U.K. you can listen to the five episodes through the BBC 4 website but if you don’t you’re kind of out of luck.

I’ll mention this isn’t like most of the TGG podcasts since I didn’t have time to record an intro and outtro. Because of this I’m not including this in the official iTunes feed but I still wanted to share the mp3 none the less!

Download the story to take on the go right here.

On a bit of a sidenote, today is also my nephew Cameron’s Birthday!

Illustrated At the Mountains of Madness Volume One Arrives November 24th