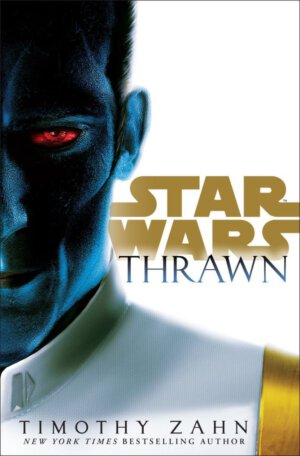 The trailer and the premiere episode – shown at London’s Star Wars Celebration – for the upcoming third season of Star Wars Rebels has revealed the return of one of the franchises’ most popular villains, Grand Admiral Thrawn, to the official canon. Originally introduced by Timothy Zahn in the 1991 novel Heir to the Empire, Thrawn became one of the center piece antagonists in the Star Wars universe through the Thrawn Trilogy (Heir to the Empire, Dark Force Rising, and The Last Command) even though the villain had never appeared in any of the films.

Truthfully, many people believe Zahn’s best selling trilogy helped to renew interest in Star Wars at a time when the franchise was all but dead. Zahn’s Star Wars novels were considered part of the expanded Star Wars universe until April 25, 2014 when nearly anything produced outside of the six films were to be considered part of Star Wars Legends (non-canonical tales) as The Force Awakens was in preproduction.

Today we now learn that Thrawn is back and in a big way! Not only will the character be an integral part of the new season of Star Wars Rebels but Timothy Zahn has a new novel on the horizon simply titled Star Wars: Thrawn. Star Wars Rebels director, Dave Filoni, said about the villain, “You couldn’t have grown up as a Star Wars fan without encountering Admiral Thrwan… It was significant. I have to say it was always on a lot of our minds.

“We have a lot of like-minded things we wanted to see in Star Wars and one of them was always Thrawn. We strategise on when best to bring him in, but it was important to do it right.”

Star Wars Rebels season three has no official airdate but is set to return this Fall while the Timothy Zahn novel is scheduled for Spring of 2017.