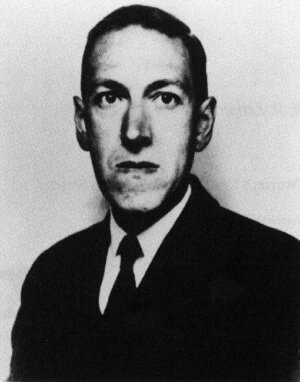 While it’s been one hundred and twenty four years since the author’s birth, and seventy seven years since his death, Howard Phillips Lovecraft (and his Cthulhu Mythos) still inspires artists of all stripes and leaves an imprint upon a wide swath of pop culture to this day. The works of the man whom Stephen King has referred to as “the father of modern horror” still provides the basis for movies, music, novels and shorts stories, comic books, and – as if we could forget – gaming of all genres. It’s very possible one hundred years from now Lovecraft’s stories will continue to be reimagined in new ways and forms of media we haven’t invented yet.

While I’m certainly not one to defend Lovecraft’s views on race and ethnic impurity, I also don’t subscribe to the knee jerk theory of judging someone outside of the context of their time. It isn’t as if Lovecraft was the only person peppering the writing of the 1920s and 1930s with racism and the belief in white, Anglo-Saxon superiority. Just crack open any pulp magazine of the time and you’ll find the tales rife with derogatory references aimed toward Asians, blacks, Europeans of “low stock”, and anyone else who wasn’t sporting a lily white hue. Yet in spite of Lovecraft’s narrow world view, and many say he became much more open-minded on race near the end of his life, the author crafted some mighty scary tales. I always recommend that when readers run across some less than politically correct reference in a Lovecraft story just wince, consider the prevalent take on racial equality of the time, and focus on the terror tale itself.

I will mention Lovecraft’s style and vocabulary take a bit of getting used to for the modern reader, especially the stories written in the 1920s, but that effort will surely lead to a much bigger payoff and appreciation. There IS a reason H.P. Lovecraft has inspired so much of modern horror and science fiction.

So in celebration of H.P. Lovecraft’s birthday I’ll share my ten favorite stories along with brief – spoiler free – summaries.

10. The Outsider (Originally published in Weird Tales, April 1926) – Told in the style of a first person narrator (something Lovecraft returns to again and again), The Outsider is a tale in which our main character has lived their life within a castle while having never come into contact with another living soul. Setting out to find others by which he may alleviate his misery and loneliness, the narrator learns much more than he may have liked about the world at large and even himself.

9. The Temple (Originally published in Weird Tales, September 1925) – I’m probably ranking this quite a bit higher than most Lovecraft enthusiasts would but there’s just something about this story of a cruel and venomous WWI U-Boat commander, Graf von Altberg-Ehrenstein, whose discovery of a small ancient idol on a victim of one the U-Boat’s targets leads he and his crew into a struggle of survival unlike anything in the naval war. Sure, it’s not one of Lovecraft’s best but I have a soft spot because this would make for a great one off tailored for an RPG. 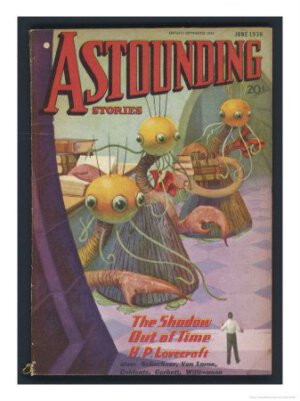 8. The Lurking Fear (Originally published in Home Brew, January through April 1925) – In reality, this isn’t a Cthulhu Mythos tale at all – Lovecraft’s earliest works were aimed at more traditional pulp horror – but it’s a fine, scary piece none the less. Our narrator claims to be “a connoisseur in horrors” and sets off to investigate local rumors of a “lurking fear” hiding on Tempest Mountain in the Catskills. What our hero learns is a whole lot more frightening than some creature hiding in the woods.

7. The Case of Charles Dexter Ward (Originally published in abridged from in Weird Tales, May and June 1941) – There’s a common misconception that a great deal of Lovecraft’s work was published following his death but that’s really not the reality; The Case of Charles Dexter Ward and The Dream-Quest of Unknown Kadath are the only tales of note which were published after Lovecraft’s Death. Lovecraft did remain in relative obscurity as a writer though until soldiers during WWII began reading just about any pulps they could get their hands on and Lovecraft finally found a wider spread audience.

To my knowledge The Case of Charles Dexter Ward is Lovecraft’s longest piece and I consider it a short novel as opposed to a novella. This story contains many of Lovecraft’s favorite themes as a young Charles Dexter Ward becomes fascinated with his ancestor Joseph Curwen, who was thought to be a wizard. Ward isn’t our main character though as the story focuses on Dr. Marinus Bicknell Willett, the man who’s trying to find the initial cause of Ward’s strange behavior and madness.

Lovecraft actually hated this novel and didn’t try very hard to get it published.

6. The Rats in the Walls (Originally published in Weird Tales, March 1924) – Let’s get this right out of the way… Our narrator, known only as Delapore, owns a cat named Nigger Man. Yep. I’m cringing at that but there’s no getting around it (although when the story was reprinted in the 1950s the cat’s name was changed to Black Tom) so there it is. Strangely enough Lovecraft loved cats and the one in the story is named after one of his favorites. No… Not Black Tom.

Our story begins after Delapore has left Massachusetts to return to his ruined ancestral estate in England, known as Exham Priory. Without having a clue to the diabolical history surrounding the place Delapore begins to renovate the place only to begin hearing the scratching of dozens, in not hundreds, of rats inside the walls. Sorry to say a quick call to an exterminator isn’t going to solve Delapore’s problems.

5. The Colour Out of Space (Originally published in Amazing Stories, March 1927) – Lovecraft had a knack for horrific science fiction and actually set out to write something with aliens completely unlike what was appearing in the pulps at the time. A strange meteor lands in an area near Arkham, MA and begins to have a very disturbing effect on the surrounding plant, animal, and human life. The Colour Out of Space is a mighty interesting take on the alien infestation trope and was not only Lovecraft’s personal favorite short story but one of his best received.

Interestingly enough, only one Lovecraft piece ever appeared in Amazing Stories since he was only paid $25 by publisher Hugo Gernsback and even that was late, leading Lovecraft to refer to Gernsbeck as “Hugo the Rat.” Lovecraft would never submit anything to Amazing Stories again. 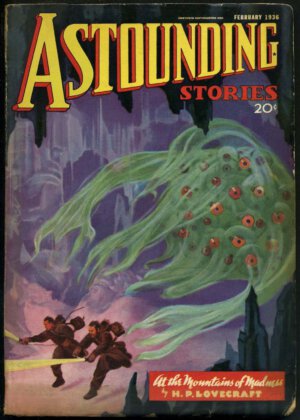 4. The Shadow Over Innsmouth (Originally publish as a bound book, April 1936) After twice having this novella turned down by Weird Tales, Lovecraft has the story published in book form; the only time this would happen in his lifetime. This is one of Lovecraft’s best and has just about everything one has come to expect from a Mythos tale: the quest for forbidden knowledge, strange cultists, an ancient entity laying hidden, and a protagonist who’s about to bite off more than they can chew.

Although our narrator has been warned about exploring the shunned Oceanside town of Innsmouth during a sightseeing tour, none the less he decides to ignore the locals to investigate. Hey, this is Lovecraft so we know this is going to end badly!

3. The Shadow Out of Time (Originally published in Astonishing Tales, June 1936) – This novella is one of the last stories Lovecraft penned and he really didn’t think much of it. I can’t say why he didn’t like it because The Shadow Out of Time is one fantastic Mythos/SF hybrid. Our narrator, Nathaniel Wingate Peaslee, believes he is losing his mind as he finds himself plagued by visions of an alien world which seem as vivid as if he were actually living there.

Many of Lovecraft’s later stories aren’t simply spook tales but begin to hint at horrors in a much more subtle way and The Shadow Out of Time is a perfect example. While there’s plenty of frightening revelations this doesn’t hammer you over the head with scares.

2. The Call of Cthulhu (Originally published in Weird Tales, February 1926) – I’m sure many of you are shocked to find, what essentially is the quintessential Lovecraft Mythos tale, coming in at number two. While the Call of Cthulhu is a great story, and has inspired a legion of fans and creators, it’s still not my favorite. There’s plenty here to love as we really get a story within a story and the payoff is a mighty big one.

We learn of a spreading madness which just may be tied to an entity being secretly worshipped by cultists around the world. Our narrator, Francis Wayland Thurston, sets the scene through the notes of his granduncle and then we learn of an Inspector John Raymond Legrasse who investigates a mysterious group in the Louisiana swamps near New Orleans. Legrasse raids the cultists, who worship a being known as Cthulhu. In a later chapter, Thurston takes to the sea in an attempt to find an uncharted island where more about the dread Cthulhu may be learned.

The Call of Cthulhu is understandably Lovecraft’s best known story (Chaosium’s venerable roleplaying game is only named after it for crying out loud) and we’re treated with the Great Old Ones, Cthulhu, diabolical and murderous cultists, alongside a heaping helping of mayhem and madness.

1.  At the Mountains of Madness (originally serialized in Astonishing Stories, February through March 1936) – Some people really dig this novella while others find it to be a bit too drawn out. Personally, I love At the Mountains of Madness as this tale probably has more references to other Lovecraft works than anything else in the Mythos. Yet, that really isn’t why I’m such a fan. This is really Lovecraft at his best as we see less of the archaic writing style and language which can plague some of the early stories.

A scientific team sets off on a highly publicized scientific expedition to Antarctica. Our narrator, geologist William Dyer, is part of this expedition which is being funded by Miskatonic University. A smaller advance group, led by Professor Lake, find the remains of ancient creatures hidden in the ice unlike anything seen before by man. When contact is lost with Lake’s group Dyer leads his team to Lake’s last known location to investigate. What follows is a classic of horror/SF which includes much of what’s made the Cthulhu Mythos so popular.

At the Mountains of Madness is a great example of the slow burn and the big reveals toward the end are perfect!

While these are just my personal favorites I should give honorable mention to a few other stories which just missed the cut: The Whisperer in the Darkness, The Thing on the Doorstep, Herbert West – Reanimator, and The Dunwhich Horror.

Illustrated At the Mountains of Madness Volume One Arrives November 24th

My pulp collection starts in 1926, and the Lovecraft issues are increasingly becoming more collected and harder to find (with Howard’s Conan Weird Tales issues leading the way).

I recently re-read The Color Out of Space in booklet form, and enjoyed it more than ever.

I do sort of have a handle on my Lovecraft. 🙂 Nice to personally know someone who owns the original pulps!