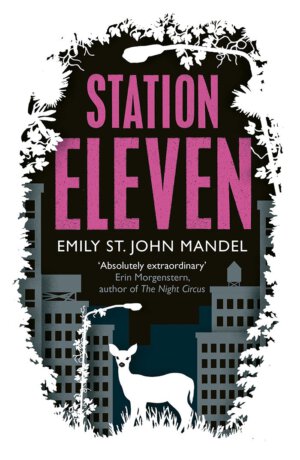 On Thursday, it was announced Emily St. John Mandel was the 2015 winner of the prestigious Arthur C. Clarke Award for her novel Station Eleven. The award is Britain’s highest honor to be bestowed each year in the genre of science fiction. Interestingly enough, St. John Mandel has been always felt her novel (one in which features a post-apocalyptic future) shouldn’t be classified as SF. The author has previously tweeted, “I actually don’t think of Station Eleven as sci-fi, but am fully prepared to concede that I may be alone in this…”

Chair of the Judges, Andrew M. Butler stated, “Station Eleven is a novel that straddles the story of a global apocalypse (the Georgia Flu that wipes out 99% of the human population) and its survivors 20 years later. While many post-apocalypse novels focus on the survival of humanity, Station Eleven focuses instead on the survival of our culture, with the novel becoming an elegy for the hyperglobalised present.”

An audacious, darkly glittering novel set in the eerie days of civilization’s collapse, Station Eleven tells the spellbinding story of a Hollywood star, his would-be savior, and a nomadic group of actors roaming the scattered outposts of the Great Lakes region, risking everything for art and humanity.

One snowy night Arthur Leander, a famous actor, has a heart attack onstage during a production ofKing Lear. Jeevan Chaudhary, a paparazzo-turned-EMT, is in the audience and leaps to his aid. A child actress named Kirsten Raymonde watches in horror as Jeevan performs CPR, pumping Arthur’s chest as the curtain drops, but Arthur is dead. That same night, as Jeevan walks home from the theater, a terrible flu begins to spread. Hospitals are flooded and Jeevan and his brother barricade themselves inside an apartment, watching out the window as cars clog the highways, gunshots ring out, and life disintegrates around them.

Fifteen years later, Kirsten is an actress with the Traveling Symphony. Together, this small troupe moves between the settlements of an altered world, performing Shakespeare and music for scattered communities of survivors. Written on their caravan, and tattooed on Kirsten’s arm is a line from Star Trek: “Because survival is insufficient.” But when they arrive in St. Deborah by the Water, they encounter a violent prophet who digs graves for anyone who dares to leave.

Spanning decades, moving back and forth in time, and vividly depicting life before and after the pandemic, this suspenseful, elegiac novel is rife with beauty. As Arthur falls in and out of love, as Jeevan watches the newscasters say their final good-byes, and as Kirsten finds herself caught in the crosshairs of the prophet, we see the strange twists of fate that connect them all. A novel of art, memory, and ambition, Station Eleven tells a story about the relationships that sustain us, the ephemeral nature of fame, and the beauty of the world as we know it.