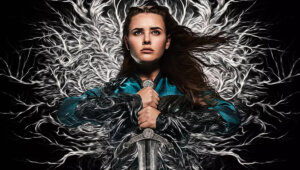 Film production in Los Angeles plummeted 97.8 % in the second quarter, compared with April to June 2019. Theaters are gasping for air, i.e. new movies. But launches of the new titles are being postponed over and over again, for health and safety reasons. The Hollywood in California is slower in going back to life than the Hollywood in Pennsylvania: the PA resort is going strong with gaming, while the movie making industry is not fully back on its feet yet. In the meanwhile, streaming has the upper hand. Netflix is churning out new series at a lively pace.

One of the most awaited in July is the newest interpretation of the Arthurian saga. “Cursed”, starring the Australian Katherine Langford as the lead character, is not the first screen version focusing on a female heroin. But it is the first that turns the limelights to an often forgotten character: Nimue. Once only, in the “Merlin” mini-series from 1998, Nimue had some visibility. But on that occasion she was turned into a princess, and Merlin’s (Sam Neill) love interest. No magic involved.

The most famous “female perspective” Arthurian movie, “The mists of Avalon” (2001), was all around Vivien and Morgaine. Nimue was hardly seen, though she had a powerful and tragic story in the novel by Marion Zimmer Bradley that inspired the mini-series. The Lady of the Lake on that occasion was identified with Vivien, played by a powerful Angelica Huston.

Who is Nimue and who is the mysterious Lady of the Lake? These two female figures have been shifting roles from one to the other interpretation of Arthur’s legend. This time, they are fused into one. Netflix’s Nimue is the Lady of the Lake. More precisely, she will become the Lady, through a perilous journey of struggles and self-discovery.

“What if the sword chooses a queen?” is the intriguing question posed in the trailer released by Netflix. Quite a belligerent statement, delivered by the firm young female voice of the heroin. Even more belligerent is her way of wielding Excalibur while raising from the lake. Arthur (Devon Terrell) is depicted in the synopsis as a mere young mercenary, who is supposed to accompany Nimue. Their task, deliver the magic sword to Merlin the sorcerer (Gustaf Skarsgård, “Viking”‘s Floki). Not much more is known so far, except that Nimue’s mother was killed by the Red Paladins who raided their village, “because magic runs through us.” The young girl belongs to a people with special powers, this is the implication from the trailer. “Our mission is the extinction of magick”, retorts the leader of the Reds. “This is a war, and in war there can be no mercy.”

“You are not some fragile maid. You are a warrior.” is Nimue’s mother’s legacy. The maiden takes it very seriously. The few seconds we have seen so far show a skilled swordswoman, although Excalibur looks massive and heavy. The ten episodes of the series (will there be a season 2, we are already wondering) were shot in locations in the UK over nine months in 2019.

Atlas of Fantastic Worlds is Up on Kickstarter