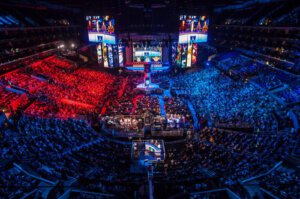 E-sports are all the rage with millions of fans tuning in to watch their favorite teams battle it out in virtual battle arenas. For most people that play e-sports, winning is all about bragging rights, but for the pros playing in televised tournaments, it is a career. Not just any career, but a career that creates millionaire superstar gamers with movie star salaries minus the global fame!

The spin off from e-sports’ immense popularity is the multi-million-dollar industries pinned to its success. One that entails sponsorship deals for the stars, TV rights and streaming rights for the tournaments, news channels, blogs, and merchandise. The merchandise side of the business includes both physical products as well as digital goods. Skins for e-sports players, hats, caps, mugs, monthly memberships, and in-game digital purchases!

On top of this, online sports books with their teams of analysts are dedicated to keeping a close eye on fresh developments within the e-sports industry. Betting exchanges, maths betting, margin experts are all involved in e-sports so their websites can offer a diverse array of e-sports betting markets or websites such as freebets.co.uk that are attracting a whole new modern era of gamers to their sports betting sites.

Dota 2 is the highest earning e-sport out there right now. Its latest International Battle Pass pulled together a mind blowing $34.33 million (£25.7 million) prize pool while in previous years its battle pass hit between $18 million and $25 million as reported by Statista leading eSports tournament studies.

Yet, if you asked a group of people whether they have heard of Dota 2, the world’s most popular MOBA (Mobile Online Battle Arena), only 1 in 15 will say yes. Even the 1 in 15 probably never plays the game and could not name 1 pro player.

However, OG, the team of 5 Dota 2 players that won the latest International Dota 2 tournament won a mouthwatering $15.62 million (£11.7 million) cut off that $34 million+ prize pool. Now $3.12 million a piece is only half the story. Each one of these guys also picked up huge sponsorship deals worth millions.

The second most popular e-sport is League of Legends (LOL). The top teams in this MOBA game are G2 Esports and Fnatic who regularly find themselves in head-to-head battles. LOL’s highest prize pool was back in 2018 when it reached $6.5 million (£4.86 million) while more recently its 2019 and 2020 tournaments dropped off to $2.2 million (£1.65 million) and $2.3 million (£1.72 million) respectively.

Of course, e-sports is a cutthroat industry where games will continuously go in and out of fashion. With LOL’s drop off, Fornite is the new kid on the block. It is a MOBa game that has 2 major tournaments every year—although 2020’s was cancelled because of COVID-19 but in 2019 the Fortnite World Cup Finals 2019—Solo conjured up a prize pool of $15.29 million (£11.44 million) and its Fortnite World Cup Finals 2019—Duo $15.1 million (£11.3 million).

Another popular MOBA tournament this year was the Call of Duty League Championship 2020 that came with a $4.6 million (£3.44 million) prize pool.

With such high prize pools and literally millions of viewers tuning mostly via Twitch.Tv, these sports come with sports betting markets just like any other sport such as Tennis, Football, Rugby, or Cricket. In short, a major notable spin off of e-sports rising popularity where there are millions of viewers and million dollar prize pools up for grabs, players can now have fun and bet on their favourite e-sports teams and players!

Tomb Raider, One of the Most Legendary Games Created