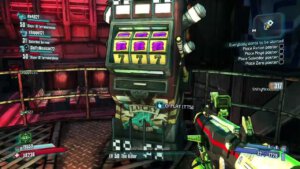 The apocalypse is now and it’s highly recommended. In the Borderlands fantasy shooter series, you will get to experience the thrill of blowing things up and laying waste to other renegades crisscrossing the highly-weaponized Wild West.

And the best part? You can even drop by a casino-like parlor and unwind after a busy day of gunning down your foes, which is practically anyone out there. The game has focused on retaining its unique signature style across the different installments in the franchise.

One of those subtle additions has been the slot system. You see, after all the day’s slaying, you will want to just kickback, and this is quite possible with Borderlands’ slots.

H2 Why Are Slot Machines Part of Borderlands?

In a world where civilization has taken the back seat and has let faceless hordes ravish the land, slot machines are indeed a thing. They can be a part of the backdrop against which the apocalypse unfolds or a source of various rewards.

But before that, you will have to set up your character, pick your weapons of considerable destruction, and even call upon a faithful mutated pet to help you eat through flesh, bone and tenders, until you have reduced the opponents to a steaming, bloodied pile.

Once you are done with all the murder, you can kickback with a slot machine. And here’s the thing – you are not in the game to just gamble. The slots are a feature carried over from the first game and part of the very identity of Borderlands.

You can visit Tiny Tina’s Lootsploison Slot Machine or check out the Torgue Slot Machine introduced in the Mr. Torgue’s Campaign of Carnage. These slots won’t pay you in cash exclusively, but rather you will reap rewards to help you out there in the battlefield.

There are all sorts of rewards you may win in an experience that will prove better than what Las Vegas can offer. Players are looking at various weapons, skins, live grenades, and of course cash!

If you decide to get generous, there is a special tip jar right across from most slot machines. Your donations will translate into better stats and weaponization for your character.

Not least of all, Borderlands is a chaotic world filled with violence and the lamentations of gamers who aren’t quite as nimble with their hands. Every time you die, you end up losing 10% of your cash, so you might want to keep the money on your character low and avoid those terminal expenditures.

The world of Borderlands is action-packed and the latest installment in the series, Borderlands 3, is no different. Good ol’ villain Handsome Jack is back and he’s a hologram dead-set on visiting all sorts of destruction upon the player.

Yet, for those adept gunmen who have grown up playing the Borderland series, a hologram is a little more than a dust mote on steroids. Besides, you can always opt for some less risky gameplay features, such as the slots.

Speaking of, the relation between gambling and gaming seems to be quite intimate. Based on a study conducted by the Faculty of Health Sciences, University of Lethbridge, around 78.5% of all gamers placed a wager in the year leading up to the study’s publication date.

In addition, 70.7% of all gamblers have played a video game over the same period. Borderlands seems like a great fit to get quite a few things out of one’s system. Even then, the concept of gambling is being innovated and incorporated in video gaming in new and unique ways.

Take GTA and The Diamond Casino, a place where players of the online world can come to gamble and spend game currency without batting an eyelash. Not only can you play any type of slot and casino game in Los Santos’ gem under the pixelated dome, but you can now stage a heist, courtesy of Rockstar Games.

Gambling-like mechanisms have been met with fair opposition, but interestingly enough, not in Grand Theft Auto. Rather, lawmakers from all over the world have been focusing on loot boxes, a seemingly innocent goodie containers, which may or may not be a conduit for gambling.

Lawmakers’ problem has to do with the fact that these containers ask for money to release a reward that depends on a hypothetical return. It’s not the same as buying something specific in the game outright. It’s more like you are taking a chance on a slot machine to win something bigger.

As Sandra Mullen, editor at compliant reviewer at casino site https://www.bestonlinecasinosites.com puts it in their casino blog about gambling, “Like many things in 2019, loot crates are facing a call to be banned, and for the wrong reasons… to equate loot crates (and thus, Pokémon cards and earlier versions of this phenomenon) as a form of gambling is nonsense.”.

To put things in perspective, a survey by the UK Gambling Commission (UKGC) has discovered that 31% of all children aged 11 – 16 paid for a loot box in 2018. The incidence of under-aged individuals coughing up for gambling-like goods has been increasing across the world.

Twitter has often proven a conduit of such practices, as youngsters are engaging readily with various ads and promos pointing in the way of ‘skins’ and ‘weapons.’ As one kid put it, ‘you sort of want to have the latest skins and weapons or, if you don’t, you are the kid who doesn’t.’

In South Korea, for example, computer games are vastly popular and while not all children enjoy them, they spend a lot of time down at the local Internet cafes which serve as community centers.

Borderlands and Grand Theft Auto offer an alternative relation between gaming and gambling. If you asked fans, there is nothing wrong with going broke in the Diamond Casino.