Las Vegas is famous for its glamour, high-stakes excitement and lobster buffets. Yep, it’s bold, brash and in-your-face, but a visit to this neon-lit Sin City is something that should be on everyone’s bucket list. Most newcomers to the city tend to stick to the slot machine games at first, and chances are that they will play at least one game developed by Williams Interactive (WMS).  This company kick-started the pinball craze of the post-war period, and many of the classic pinball machines which people go crazy for at auction are Williams products.

In the 1990’s, the company realized that contemporary slot machines were due an upgrade, as the standard themes of horseshoes, fruit and Liberty Bells had stood unchanged for decades. Rebranding as WMS, they pioneered the themed slots that people now enjoy in Vegas today. If you take a walk around the gaming lobby of Caesar’s Palace or the Bellagio, and have a look at the most popular machines, chances are they will be running WMS-themed games.

Until relatively recently, you had to visit towns like Vegas or Atlantic City to enjoy games from WMS and other slot providers. Thanks to the advent of the smartphone, you can now experience the thrill of the most engrossing themed slot games wherever you are, by either downloading an app on your Android or iOS device, or visiting the mobile-friendly website of an online casino. You can play for fun, and depending on your geographical location, even play for real money. As you would expect for such a pioneering company, WMS Interactive are at the forefront of slot games which can be played on your smartphone. Here’s a look at our 5 favorites. 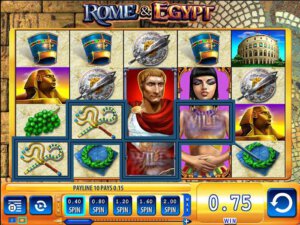 Named after the two great civilizations of the ancient world, Rome and Egypt is an exciting slot game which has been beautifully designed to reflect the splendour of these two empires. In real life, Rome and Egypt were united by Cleopatra’s romances with first Julius Caesar and then Mark Antony, and these characters all play a major role in the slot game. Other symbols include the Egyptian priest’s hat, laurels, the Coliseum, the Sphinx, and pyramids, which come together to lend the game an epic feel. As well as being available at most online casinos, WMS have licensed Rome and Egypt for the Google Play Store which means Android device owners can experience the thrill of this classic game while on the move or wherever the mood takes them.

Zeus is one of the top casino slot games of all time, and many visitors to Las Vegas casinos make a beeline for this one as soon as they enter the building. Now they can play on their smartphone too, as Zeus is available to play at several mobile-friendly casinos, in both free play and real money mode. This fast-moving slot game is themed around the gods of Ancient Greece, and as you might expect, the greatest god of all – Zeus – features prominently. Other symbols include Pegasus, Wreath and Harp, with Acropolis symbols making up the wilds. This game is so much fun, with plenty of action no matter how big or small your bankroll happens to be.

This slot is inspired by the classic 1939 Wizard of Oz movie and has the kind of magical, dream-like feel which makes it the ideal slot game to play when you want to relax and unwind after a hard day. Technically, it is a 5-reel, 30-payline slot with 45 different ways to trigger the bonus, and discovering these Oz-themed bonuses is a big part of the fun. The Ruby Slippers bonus is a random wild feature which turns some of the reels into wild symbols, and multiplies any winnings. If you get really lucky, Glenda the Good Witch will make an appearance and multiply your winnings tenfold. With broom features, crystal balls features and an Emerald City Free Spins bonus, this classic game is a must for any fan of the film. 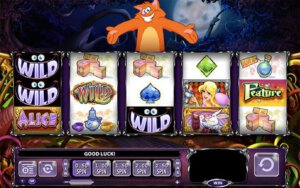 Alice and the Mad Tea Party

Alice and the Mad Tea Party slot will appeal to anyone who loves the story of Alice in Wonderland. Written as a novel in 1865 by Lewis Carroll, and the subject of so many film adaptations, the story tells the tale of a girl named Alice who accidentally falls through a rabbit hole into a mysterious Wonderland populated by fantastical characters. The slot itself features 5 reels and comes with 30 fixed pay lines as well as scatters, free spins, multipliers, and a bonus. The slot icons include Alice herself, as well as the imaginary creatures from the story, such as the Rabbit and the Mad Hatter. Secondary symbols include the Drink Me Potion, the Eat Me Cake, and the Tea Set, while Mad Hatter, Cheshire Cat, Queen and Caterpillar features ensure that the game stays true to the original story.

If you are fascinated by martial arts and the mystery of the Orient, then you simply must try this slot game, based on the life and times of the late Bruce Lee. This iconic martial arts legend and actor single-handedly helped to make karate popular all over the world in the early 70’s. Movies such as Enter the Dragon and Fist of Fury were packed with heart-stopping action, and so is the Bruce Lee slot game, which features WMS’s unique Money Burst format. As you would expect, the symbols are martial arts related, featuring Bruce Lee himself, as well as the Leg Kick, Chinese Hat, Dragon, Throwing Stars and other ninja related icons. Like all games on this list, you can play Bruce Lee slot on your smartphone or at online casino of your choice.

The best thing about all these games is that they are so exciting that you don’t need to play for real money to have a great time playing them. If you are lucky enough to live in a gambling-friendly jurisdiction and want to get the best available bonus deals on these games, Gambling Metropolis has a constantly updated list of the best casino slots, as well as some exclusive bonuses which you won’t find anywhere else. Happy spinning!