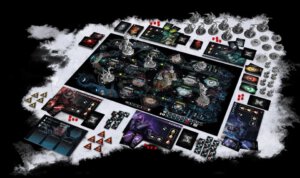 If you want a break from the traditional Monopoly games, you can play many different interesting board games that are perfect for spending time with your friends. New board games are coming out every day and they are more complicated and interesting to play with very intense gameplay.

Developing an interesting board game requires a lot time and imagination as well as well created rules that do not compromise the gameplay.

Nemesis is one of the exclusive board games developed by Awaken Realms that comes in horror sci-fi gameplay. The game is semi-cooperative and it is 1-5 players group game. The game starts as the crew of the spaceship is woken from hibernation. Players quickly realize that there is a critical failure on the ship and they cannot continue on the same path. The crew starts to search for fix for this major issue in order to return back to Earth. However, they realize that one of their crew members is dead and something or someone is responsible for the system malfunctioning and the murder. The strange things go on as you can year a lot of strange sounds that are never heard before.

Setting up Nemesis for the first time can be a bit complicated but you can quickly find the right way to play if you go through the instructions. Nemesis has two-room tiles which operate some functions, for example, room one tiles are used as a ship commands that activate different functions and room two tiles are for adding more flavor to the game making it more interesting. You need to shuffle all the rooms and place them on the board with the question mark up, that will indicate spaces. You will have some rooms leftover but you can but them in the box as you don’t need them.

There are also coordinate cards that you need to shuffle and place them face down on the board that indicated space “B”. There are also escape pods in this game but they are used according to the players that play, for example 3/4 players get three escape pods.

Engine tokes are also part of Nemesis as they are the key for a successful escape, but even though there are three engine tokens, one of them is damaged and out of function. You have to shuffle and place down to the marked locations. The next thing is to set up the intruder board next to the main gameplay area. This means that you have to put five eggs and 3 random intruder weakness cards face down.

There are also a couple of characters that are essential for the gameplay of this board game such as 4 Larvae, 1 Queen, 3 Adults, 1 Creeper, 1 Blank token, and 1 additional adult per player in the game.

Even though the setup of Nemesis might seem complicated to understand, the gameplay is very simple although the side rules tend to be a complicated part of the game.  Action cards and dices are the main way to move in this game and each round means drawing 5 action cards that you can spend them on basic actions that the card resembles. The game is unpredictable and sometimes you cannot control the direction you want to go, for example, if you enter an empty room, you have to roll a dice to see from which direction you will hear some noise. Exploration tiles act as booby traps covering you with slime, bursting unexpected fire, closing doors or making you have to roll for noise direction. The main purpose of the gameplay is to fix the ship and return back to earth. However, there are many different things that will stop you, even some of your teammates can decide to turn a back on you and blow up the ship or switch route to head to Mars.

It is a very interesting and mysterious game that can be played for hours. However, just because there are a lot of cards, action figures, and characters in this game it requires a lot of time to set up and its starting price is $179 which is quite expensive.