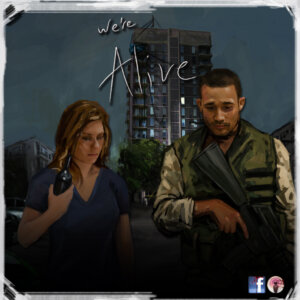 You would have to live under a rock, or in reality just starting to visit the site or listen to our show, to not know that the podcast We’re Alive – a Story of Survival is one of Elliott and my favorites. We know we’re not alone in our appreciation for the zombie apocalypse program as it has been nominated for an Audie Award (the Oscar of audio productions we must say) for their first season and has thousands of followers on Facebook alone!

Now you can help send the gang from We’re Alive to the Audie Awards to hopefully take home the win by bidding on a speaking role on the podcast. Here’s more info about the show and the final week of the eBay auction:

For Army Reserve soldier Michael Cross, the world as he knows it ends in an instant. One minute he’s in college, and the next rioters are roaming the highway around him, breaking into cars and literally tearing people apart. This is the day the dead walk. This is the world of We’re Alive.

We’re Alive is packed with performances and sound effects that rival movies and prove that modern audio drama is undead and well. Join our survivors as they band together, struggle to fortify a safe haven known as the Tower, and discover that zombies are far from the worst thing in a post-apocalyptic Los Angeles where the rules of human decency no longer apply.

Who is lucky enough to say ”We’re Alive”?

Support We’re Alive with this Fundraiser Auction! Your name, your REAL name, and your voice, will IMMORTALIZED as a character in We’re Alive!

You’ll even get a bound copy of the pages your character is on signed by the author, Kc Wayland.

Since ebay requires a PHYSICAL item to be auctioned off, what you will be getting is a copy of the pages for your character from the script, and the appearance on the show and name are simply a bonus to the auction.

Your character could have as few as two lines and as as many as several pages. The exact details of the character will be determined by the writer after an interview with the winner of the auction.

We can guarantee that the scene will not be defamatory towards any person or namesake. In fact, the Character in question has already been written into the story, so this is merely an adaptation to ONE lucky bidder.

If you want to record with the Cast on our normal set recording day on April 15th OR another time at our studio in Orange County, you have to provide your own transportation and accommodations, and willing to sign a full Non-Disclosure Agreement.

If you cannot make it to the studio to record for whatever reason, the character will still bear your name, and you will have the option to record and send your recording in. HOWEVER, the audio must meet our fidelity requirements, or we will not be able to use it. Also, the name has to be your real name, not something made up.

Top 4 Best Defensive Teams To Use In Madden 22

Looking at Comic Characters and Their Connection to Gaming