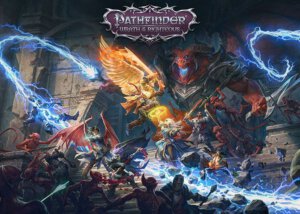 If you were a fan of the Pathfinder: Kingmaker game, then there is some good news that you need to be aware of. Owlcat Games has announced working on Pathfinder: Wrath of the Righteous, which is a sequel of the first game. In order to get funding for the game, they started a Kickstarter. It’s said that the campaign is going to launch on February 4 at 8 AM PDT. It is going to run for a full month too, giving people enough time to fund the new release.

According to their Kickstarter announcement, there were already significant contributions to the campaign. Therefore, the campaign will keep going and is very likely to reach its goal.

The two Pathfinder games, aka Kingmaker and its sequel, are inspired by a tabletop role-playing game with the same name. The difference is that the tabletop RPG comes from Paizo Publishing.

The first Pathfinder game, aka “Pathfinder: Kingmaker”, was a game that allowed people to build their own country. They could look at their companion characters in different lights, making them feel like they’re actually developing a country. But in the sequel, players will have to take another thing into consideration. They have to consider their decisions wisely, especially if they intend to be great leaders in the game.

Players will have to play a battle between demons and mortals. You would be able to choose between a number of Mythic Paths. Of course, each of these will have a certain influence on warfare. In addition, you are able to create conflict too.

The sequel’s creative director, Alexander Mishulin, said “Pathfinder: Kingmaker featured kingdom building, which allowed fans to feel as if they were actually developing a country and gave us the opportunity to see companion characters from a different angle. The kingdom building was well-received by many players. This encouraged us to introduce a similar feature to the Wrath of the Righteous. Players will have to carefully consider each decision they make as they lead the crusade. Recruiting and upgrading one’s armies, capturing and holding strategic points, and exploring ancient ruins to find powerful artifacts are just a few of the many activities that require one’s undivided attention. Of course, companions will try their best to help. We listened to the feedback on the kingdom building and acted upon it to make the most captivating crusade experience possible.”

Making a Kickstarter to support the release of the new game may not be the best thing to do. Owlcat Games didn’t really think this think through. Basically, Pathfinder: Kingmaker was very difficult, and it also had glitches after its release. Because of this, people might not be too eager to support a game from the same company. The Kickstarter already got money from a few sources, but it’s not guaranteed that people will want to support the new game. It’s only a matter of time until they see the content and bonuses the Kickstarter will bring them.

Will Owlcat Reach Their Goal?

Even though not all people may be willing to support the campaign given how the launch of the first game went, the Kickstarter is still likely to reach its goal. Owlcat had a previous campaign with an ask of $500,000. They managed to get more than they asked for, receiving respectively $900,000 on Kickstarter. They also kicked in about one-and-a-half-year lead time. Therefore, it’s to be expected that the same thing could happen with this campaign, which would be nice to see.

So far, there aren’t any details about the next campaign, so we can only wait and see what’s going to happen.

The Kickstarter for Pathfinder: Wrath of the Righteous will launch in February. So, if you want to support the game, you still have time to gather some funds and help Owlcat Games. Until then, you can click here and try to win some cash for supporting the campaign through betting. You never know how you’ll get enough to make a significant donation.