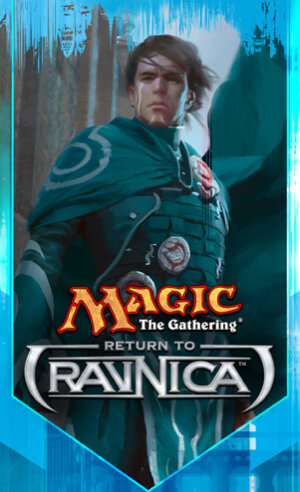 A new novella emerges in the Multiverse, and you can get it right now!

Return to Ravnica: The Secretist, Part One

Jace Beleren has the power to travel between planes of the Multiverse, but with this gift comes isolation. He is one in a million. He is a planeswalker. And he is on the edge of a mystery that could alter the face of his adopted home—a vast, world-wide city known as Ravnica—forever.

Faced with a magical code that is built into the very foundations of the city-world itself, Jace marches into the numinous depths of Ravnica’s underbelly in search of the promise of powerful magic. What he finds is perhaps more burden than boon.

Once buried in past, the code resurfaces as Ravnica’s power-hungry mage guilds, unbound by the Guildpact that had once maintained order, struggle for control of the plane. But in the drive for primacy, there is no neutral ground.

Jace knows that he can’t crack the code on his own, not while the guilds task teams of mages to unravel the mysteries, but he also knows that the danger of the quest is too great to include his friends. As the mystery begins to unravel, the choice may not be his alone.

Ravnica is a plane of intrigue, mystery and few answers; however, Magic fans now have the opportunity to get a glimpse of the fabled plane like never before. Wizards of the Coast today released Return to Ravnica, The Secretist Part 1, the first of a three part e-book in the form of a novella, written by Doug Beyer, writer and creative designer on the Magic: The Gathering R&D team.

In this first e-book, fans follow Planewalker Jace Beleren as he returns to his adoptive home of Ravnica to find all of the guilds preparing for battle. In his journey, he discovers evidence of disturbing gaps in his memory and a series of assassins on his trail. He also tries to reconnect with an old friend, but when she turns up dead, he ends up embroiled in a mystery that implicates all ten guilds and an ancient secret. While battle rages on across Ravnica, Jace finds himself fighting his own battle, with his own challenges and obstacles.

Return to Ravnica, The Secretist Part 1 is available beginning today in the U.S. and Canada for $1.99 at Amazon / Barnes & Noble / Kobo.

Tags
Magic the Gathering Return to Ravnica Wizards of the Coast