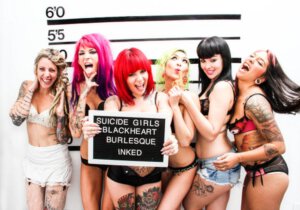 SuicideGirls is returning to the road with an all new tour of their Blackheart Burlesque scheduled through the Fall of 2014. The tour is set to hit over 40 cities from now through the end of the year!

SuicideGirls, the internet’s top community celebrating alternative beauty and indie culture, is excited to bring back their NEW version of the traveling Blackheart Burlesque! This sexy geek-fantasy show will hit the road this fall for a U.S. Tour beginning in Denver, CO on October 14th and wrapping in West Hollywood, CA on December 5th.

The SuicideGirls are continuing their seductive worldwide rule. In the early 2000′s the SuicideGirls Burlesque show crisscrossed North America for five years. The girls entertained thousands of people at sold-out headlining shows, opening for Guns ‘n’ Roses and Courtney Love and went overseas to perform at music festivals in both Europe and Australia. In fall of 2013 the girls decided it was time to put the show on the road again and they spent six weeks playing sold out shows across the United States. It was so much fun they decided to take it worldwide! In spring of 2014 the girls took on Australia and Canada to perform additional sold out shows. They can’t wait to bring their show back to the US this fall!