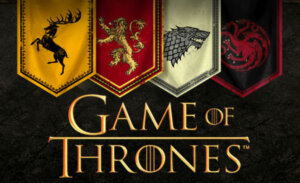 Game of Thrones: A Huge Franchise

When a television series becomes as successful as Game of Thrones, they naturally capitalize on the popularity by releasing a series of official franchise items. It is not clear why we like to have our favorite TV characters on our mugs, tee-shirts and stationary but it has become something of a global tradition. With so many new casino sites coming into the marketplace, the large software houses that supply them compete to get the rights to make the tribute slot game as it is always a surefire hit.

Of course, it is not just the casinos that get rights to make games that feature the official characters, logos and soundtracks. Console games are big business, and therefore it comes as no surprise that Game of Thrones, affectionately dubbed GoT, has two console-based role player games (RPG) available to fans. Now, to be honest, the jury is a little conflicted as to how good these really are, but that is generally the case. You cannot please all of the people all of the time! At the end of the day, nothing is going to be as good as the TV but since they aired the series finale players of tribute games have soared in numbers as people struggle to let go of their heroes.

A Blast from the Recent Past

The 2012 game is set at to run with series one of the show, which fans will tell you is now a long time ago. If you are new to the game, it is worth giving the first series a watch, but be careful you might end up binge-watching all series and becoming a super fan. In the game, the main characters are Alester Sarwyck and Mors Westford and the action switches between the storylines for the two men. It is nicely action-packed and certainly reminiscent of the look and feel of the television version. The game is available on Playstation and other platforms.

In 2014 a second version was released which extended platform to incorporate mobile devices as gaming on phones started to rocket in popularity. To quote the blurb, this interactive game is a hit because ‘player choices and actions influence later events across the six-episode arc’ which gives it a compelling appeal. This version is focused on the northern House Forrester, rulers of Ironrath, and the action that occurs after they lose the War of the Five Kings. If you think you recognise some of the characters voices, you are correct, as many actors were used to add authenticity to the game. A second season was due in 2017 but got shelved and ultimately canned for good when the studios at Telltale closed in 2018.

The slot game is obviously not an RPG, the format is much more traditional for the casino audience, but it is still an official game that features many images and soundtrack snippets from the television series. It offers a good level of action, and there are some great opportunities to win.