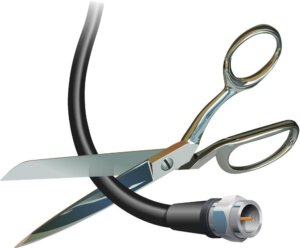 Almost seventy-eight percent of American households have a Cable TV connection. The monthly cable bill for an average cable package is $100 a month, which saw a hike of 1% in the past year. Owing to this expense, more and more people are opting to cut the cord, however, there are others who have never been slaves to cords. Someone fleetingly named them “cord-never”. Not cool Jack, not cool!

The folks I just mentioned go for streaming services as an alternative. They go for alternatives like Netflix, Hulu, Amazon Prime, Chormecast, Roku, etc. Now the question arises, whether to cut the cord and go for streaming for the last time. However, is that a good idea? Let’s break this down and weigh the pros and cons.

Are Streaming Services, the Future?

Famous streaming services have now started producing content like all the Netflix Originals and show like Transparent by Amazon, watching your favorite shows without cable is not-a-big-deal. Well, think again, for someone who wants it all would agree that streaming services are just a supplement to cable subscriptions. Hence, may not save you as much money as you expect it to, and choosing one of the two is like giving up on something. “We ain’t want that!”

A survey conducted with 500 Americans reported almost 50% of the respondents still watched cable tv only, most of them being 50-60-year-olds. About 31% of young adults claim to watch a combination of both. A small proportion (approx. 10%) reported streaming only. Key Takeaway: Age matters in their choice of medium for entertainment.

Most of the subscribers opting for bundles primarily go for on-demand options for TV programs rather than movies. For movies, their first preference for on-demand options is streaming services. In short, both of them go hand-in-hand when it comes to providing wholesome entertainment for everyone. Many viewers go for streaming services to re-watch old TV programs that no longer air on cable. While some have both cable and streaming service subscribed so the dad can keep watching his game as the kids stream their content.

ESPN holding the Cable TV together

ESPN is one of the most expensive channels on your cable subscription list. The reason? ESPN has to pay a good amount of money to purchase rights for the most preferred professional and college-level games. You’re paying a large chunk of your cable bill per annum to subsidize ESPN for sports lovers. In other words, you’re taking out $75 on average annually for watching 200-pound dudes hitting each other hysterically.

Also, ESPN doesn’t plan on unbundling from hefty cable packages any time soon. Since they are warry of the fact that they might end up losing more subscribers than gaining some if they go on to offer their standalone streaming service. According to practical estimates, ESPN’s streaming service, if offered, is expected to cost at least $36 per month.

The final and fanciest twist to ESPN story; cable companies can’t put together a premium or custom channel package without including ESPN in their basic offering. In other words, ESPN has an agreement with the cable companies that forbids them from taking it out of the basic suite of channels. If you do so, prepare to be sued by ESPN.

Basic cable heavyweights such as Lifetime, BBC America and TCM can not be downloaded unless you have a licensed cable tv provider’s login and password. If you wanted to watch the recent Lifetime War & Peace miniseries then you either needed a subscription on your own, or you would need to borrow the password from someone else.

And while buying a few seasons of a TV show over the course of a year may still be financially relevant compared to an expensive cable subscription, that doesn’t mean throwing out $30 a season won’t burn. It’s weird to pay outright for something that you have been getting for ‘free’ (well, in a way). While expensive, cable packages feel like you’re purchasing access to virtually endless stuff. Buying a television season is like buying access to a television season and that too for the one you don’t know if you’re going to want to watch ever again.

Streaming is an alternative (often) low-cost to an expensive cable tv subscription. However, we’re currently in the midst of an inconvenient, haphazard transition in home entertainment, where financial incentives and legal restrictions prevent both streaming services or cable subscriptions from giving customers sufficient channel coverage of their choice.