Yes… I’ve shared this episode twice before when I included it in our 2012 Halloween show and then as a double dip of OTR fun last year but I’d be remiss if I didn’t include what might be the downright scariest show to hit the airwaves in the 1940s, if not ever. Since we’re getting closer to All Hallow’s Eve I’m busting out some of the real classics of the genre. The Thing on The Fourbleboard is without a doubt the most highly regarded episode of Quiet, Please and for good reason; Ernest Chappell’s “everyman,” matter of fact delivery was never finer and the slow build up to a sledgehammer ending is one of the best to ever air.

An oil field roughneck spends a couple of unforgettable evenings at a derrick which is drilling further than most rigs in the world. Lives will be forever changed, and ended, by the unearthing of The Thing on the Fourbleboard.

Snap off those lights and give a listen to one of the finest examples of old time radio horror with The Thing on the Fourbleboard as it aired on Quiet, Please on August 9th, 1948.

A quick sidenote… When dealing with shows nearly seventy years old those of us who dig the old time radio shows face the challenge of trying to clean up the audio – which normally has lots of hiss, crackles, and pops – while trying to maintain a natural sound which doesn’t draw away the sense one may have had when the show originally aired; since I’m just a regular Joe, without access to state of the art software to scrub the audio, my aim is always to provide a good listening experience. I could easily eliminate the “noise” heard in an episode but it leaves the show sounding less “warm” and much more tinny and flat so I err on the side of warmth rather than a sound like you’re listening through a tin can…

Just another quick sidenote… On your first listening to The Thing on the Fourbleboard you’ll no doubt find the ending to be pretty damn creepy. It’s only after the story sets in and you take into account the show aired in the 1940s, when sex wasn’t a topic openly discussed on radio shows, at a time when it was a given if a woman was someone’s wife then obviously sex entered into the equation this really becomes a truly bizarre and chilling tale. 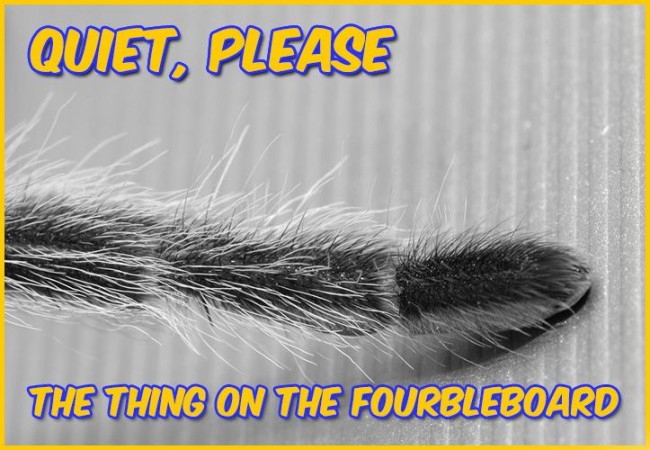