I always point out my favorite radio performer was the indomitable Orson Welles. It’s more than likely we’ll be hearing from Mr. Welles more than once this month but I wanted to share Welles’ earliest starring turn, as Dracula (among other characters from the classic novel), for his Mercury Theater on the Air. Only twenty two, Welles was already established as one of the country’s premiere theater directors and easily segued into radio where he quickly became one of the highest paid performers. Following his success establishing the Mercury Theatre for the Depression era program known as the Federal Theater Project (a means to put unemployed artists, writers, and directors back to work while also entertaining poor families and creating relevant art) CBS offered Welles a nine week summer series.

Having just completed the first season of The Shadow, Welles turned his attention to what was originally conceived as First Person Singular – a series where Welles would portray the lead character and the tales would be presented by way of first person narration. Owing to the popularity of the Mercury Theater name, and the fact the series would feature many of the theater actors, the title of the program was changed to The Mercury Theater on the Air. The program hit the air on July 11th, 1938 and the initial offering was tonight’s Spooktacular: Dracula!

So turn out the lights and enjoy!

Interestingly enough Welles seemed to feel his days in radio were his finest as he reflected in 1983:

“Radio is what I love most of all. The wonderful excitement of what could happen in live radio, when everything that could go wrong did go wrong. I was making a couple of thousand a week, scampering in ambulances from studio to studio, and committing much of what I made to support the Mercury. I wouldn’t want to return to those frenetic 20-hour working day years, but I miss them because they are so irredeemably gone.” 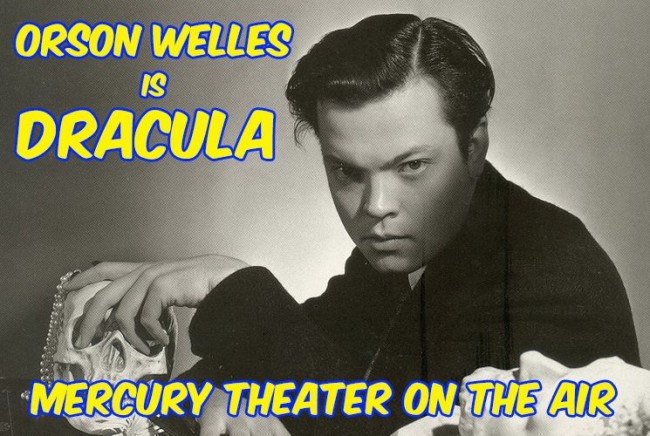