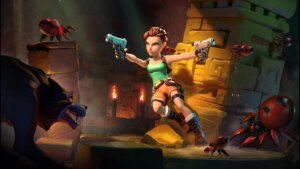 One of the most iconic games played by millions of players across the world is none other than Tomb Raider. The main character, Lara Croft is known for her action, excitement, guns and relics with more than 20 years worth of game releases in the Tomb Raider series. To be precise, there are twelve official games that have been released on consoles with a few online and mobile and spin-offs bolstering its popularity along with film adaptations that no fan would want to miss.

Tomb Raider is an action arcade game featuring treasure hunting and face-offs against rock trolls, dinosaurs, giant spiders and killer wolves. As with any treasure hunting game, comes booby traps in secret caves and missions to keep you enthralled every step of the way.

Tomb Raider: The History Behind the Game

In the year 1996, the world had its first taste of Tomb Raider, where players had to handle guns, brave chasms and make sure the main character doesn’t drown while fulfilling her missions. Tomb Raider has gone on to create entirely new worlds with supernatural foes as well as pirates and a host of other baddies wanting to obtain relics for their own gain. Tomb Raider hasn’t been making noise in the industry recently, with the last game released in 2018 called Shadow of the Tomb Raider. This was a sequel to Rise of the Tomb Raider in 2015 and also followed the story from the simply titled Tomb Raider in 2013.

Lara Croft’s origins and game storylines have become a main attraction in these games and have been built and written with great care. There have even been games released that offered expansion packs to keep fans going if they have already completed the games. But what’s interesting is that Tomb Raider has also found its way into other forms of media aside from films. Lara Croft can be seen on theme park rides, in comic books and novels, and even a TV show that showed a reimagined version of Tomb Raider and broadcasted by GameTap in 2007.

Every Tomb Raider instalment has been available on PlayStation, and various other platforms, and with the release of Sony’s new console, fans of the game are waiting patiently to see what it has to offer. Over the years, Tomb Raider fans have seen how the design and graphics have evolved to make the character look more realistic and to add more depth to her aesthetics and more excitement and detail to the gameplay. Long gone of the days of seeing Lara in a pixelated fashion and how she’s barely able to use a full range of motions. The iconic double-pistol shooting style has carried over through all of the instalments and has not been left behind in the latest mobile release either. Even though the mobile game we expect to see some time next year in 2021, does seem like a softer and more cartoonish approach, you can rest assured that the action has not been left behind.

Other Versions of the Game

Tomb Raider doesn’t only exist on the console. In fact, this iconic game is also available as an online game. To be precise, players can enjoy the game as an online slot which is aptly named “Tomb Raider slot”. That’s right, slot game developers, Microgaming, has taken this game to a whole new level by allowing players to play in demo mode or for real money. The slot game comes with a great RTP of 96.56% and has a total of 5 reels and 15 paylines. Furthermore, the Tomb Raider slot has loads of other great features such as a free spins bonus round, wilds, scatters, and fantastically designed graphics that are true to the theme.

The only information that has been released thus far is the teaser trailer and that the game will be released in 2021. From the trailer, you can see obvious nods to previous versions of Tomb Raider and Lara Croft firing off double-pistol shots at the enemies getting in the way of her finding hidden treasures. Furthermore, once the game is officially released, iOS and Android users will be able to get the game from their relative App Store to enjoy wherever they go. The release will keep fans entertained while waiting for a new instalment of Tomb Raider as well as the sequel to 2018’s film reboot, Tomb Raider, with Lara Croft played by Alicia Vikander, announced in 2019. Another instalment always comes with more excitement when it comes to Tomb Raider and Tomb Raider Reloaded looks to offer nothing less.