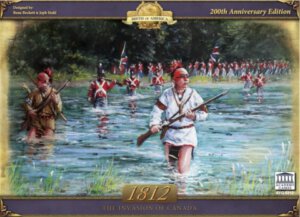 Eagle-Gryphon Games will be bringing us 1812 – The Invasion of Canada! from Academy Games this January.
The Birth of America Series from Academy Games provides an outstanding experience for people new to conflict games as well as those interested in the history of the United States. Every game in the series will include historical information about the conflict that is explored in that game, providing players with an educational experience as well as a historical context of the events leading up to the conflict.
1812 – The Invasion of Canada is a tremendous starting point for the Birth of America series and is one of those rare games that allows players to dive into the game quickly yet be rewarded with dynamic and strategic gameplay that will keep players coming back for more!
The year is 1812. Great Britain and her allies are battling Napoleon for control of Europe. In response to British seizure of American ships and goods, the young United States declares war on Britain and invades Canada. You and up to 4 other players take command of the armies of the British Redcoats, Canadian Militia, and Native Americans, or of the American Regulars and American Militia to decide the fate of the Americas. The action takes place on a huge historically accurate map that spans the United States and Canada from Detroit to Montreal. Players from each faction cooperate to gain control of key towns and forts.
Historically accurate artwork brings the conflict to life as players use key events, historic figures and tactics of the era to 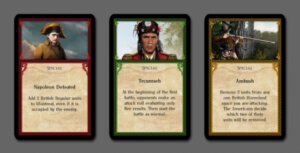 influence the outcome of the conflict!
Intuitive movement and gameplay help players immerse themselves in gameplay almost immediately, allowing them to focus on the strategy and flow of the game. Each engagement is unique and rewards players with an engaging and rewarding experience.
Tags
1812 - The Invasion of Canada Academy Games Eagle-Gryphon Games Tabletop Gaming