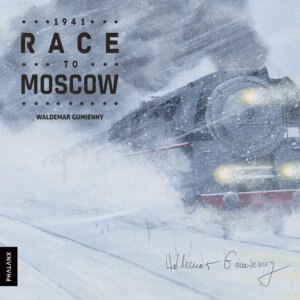 Phalanx Games has a new WWII wargame up for crowdfunding and it tackles the strategy and logistics of Operation Barbarrosa. 1941: Race to Moscow will challenge players as they attempt to supply armies to continue the fight across a massive front. The game is for one to four players, ages 14+, and plays in an hour or more. The project just reached 100% of it’s funding goal and you can reserve a copy for a $78.00 pledge through December 11th. Expected delivery is October 2020.

The line between disorder and order lies in logistics is a very sound Sun Tzu quote that perfectly describes the importance of logistics in military operations. This sentence has been an inspiration for the 1944. Race to the Rhine board game, that has shown the ‘44 Western Front campaign from a logistics perspective. The game, published in 2014 in four language editions and sold in the thousands, has been nominated for Golden Geek Award for the Best Wargame and received 3rd place in the Wargame category of Tric Trac d’Or 2015.

Five years later we are proud to offer you a new game in the series, focused on the ‘41 Eastern Front campaign. 1941. Race to Moscow brings the system to a completely new level, with much deeper and more demanding gameplay, as the Eastern Front logistics was a nightmare of horse wagon, truck, and train composed supply columns. What is more, the powerful enemy armies are just across the border, getting ready to launch an onslaught. With the world’s strongest army to beat and a difficult logistical puzzle to solve, 1941. Race to Moscow is a dream come true for every wargamer!

In 1941. Race to Moscow, which by some is considered to be a war-themed pick up and delivery and by others a very simple (but not simplistic) approach to large scale military logistics, the players take the roles of chiefs of staff (or quartermasters) of three massive Army Groups, formed together from close to 200 divisions, which aim at the centers of the Soviet Union – Moscow, Leningrad and Rostov. The campaign itself was planned to be swift and daring, with a goal to reach the objectives before winter. In reality, after the final push – Operation Typhoon – the invading troops reached the vicinity of Moscow and looked through binoculars at the Kremlin spires on one frosty December morning. And then, the Soviet counteroffensive started.