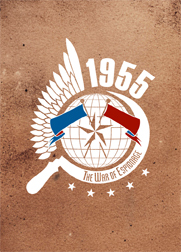 1955: The War of Espionage has made a long trip from its original appearance on Kickstarter to shipping out to your friendly local game store. I reviewed the game quite a while back on the show, so give a listen to see if this card game is going to up your alley.

Failure is not an option! The Cold War has endured for years. The Blue Faction and the Red Faction are delicately balanced and evenly matched, each constantly maneuvering in the shadows, neither prepared to make the first move. But, the peace has been shattered and your opponent has launched their master campaign! As Spymaster, you know this will be a game of wits and brawn, matching all of your forces against theirs, with the world’s future hanging in the balance! In 1955: The War of Espionage, you are the head of one of the two major Faction’s Covert operations Agency, tasked with protecting your country from the tainted views of your enemies while seeking to gain the trust and support of the world’s population.