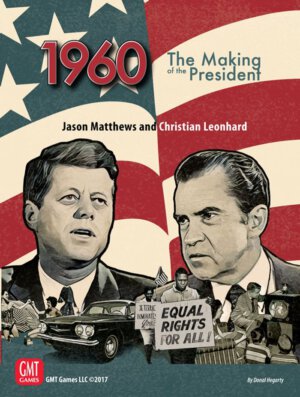 I show you the basics of how to play, and review, 1960: The Making of the President from GMT Games. Plus the latest news from Renegade Game Studios, Fantasy Flight Games, GMT, Steve Jackson Games, and more!

01:15 Show open
08:00 Today’s news
30:00 Contest winner announced
33:20 1960 How to play/review
TGG REVIEW
9.5 TGG SCORE
0 VISITORS' SCORE (0 votes)
Summary
1960: The Making of the President is an excellent addition to nearly any gamer's collection. As a card driven game which is easy to wrap your head around, players can focus on the back and forth, seesawing of influence management as they aim to guide their candidate to victory. Plus gamers can learn a bit of history, and how the electoral process works, at the same time!
REVIEW SCORE
What people say... Leave your rating
Sort by: