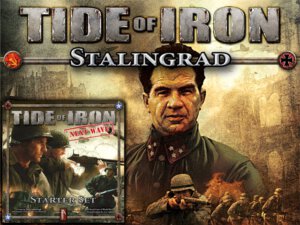 I cant say this is a great start for 1A Games and their Tide of Iron license but it certainly could have been worse; Say if the title got funded and then the project went up in smoke like a few other projects we’ve seen. 1A announced they were cancelling their Kickstarter for Tide of Iron: Next Wave and the expansion, Stalingrad. Obviously the project wasn’t garnering enough support as over two weeks in the funding level hadn’t crossed the 25% threshold to goal. As the announcement below indicates, the project isn’t dead but will undergo pricing tweaks and it isn’t as if the two titles aren’t going to arrive as they were already in production prior to the KS launch.

Personally, I think the project had issues in regards to getting the word out to the gaming press (like TGG for example), unsighty international shipping fees, and mainly facing the fact most people who were aware of the project already own the previous Fantasy Flight Games releases didn’t have a lot of interest in spending $75 for the new rules and the Stalingrad expansion. Not to mention overseas buyers were looking at a $125 price tag due to shipping.

1A Games’s motto is “We recognize and listen to our fans” – and we have been listening.

We need to fix some of the pledge prices, add new pledge levels, and hopefully find a way to lower the shipping costs to our overseas fans.

Therefore, we are canceling this Kickstarter.

It will be re-launched after we re-write the pledge levels, and after we preview the revised version – especially with everyone who gave us feedback.

Thanks for your patience, understanding, and support!