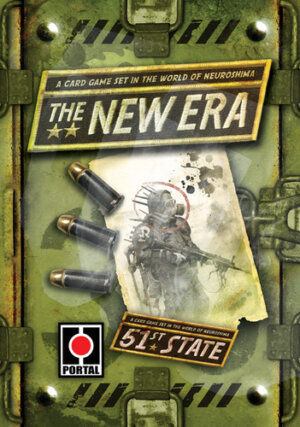 Eagle-Gryphon Games has some new releases from Portal Publishing fresh from their debut at Essen. The first on the list is The New Era: A standalone expansion to 51st State, the post-apocalyptic card game.

Looks like the game is still on pre-order or is gone already, hopefully we’ll see it soon. I liked this game.

Four factions have grown and their boundaries widened. The conflict is not to be averted. Blood will soon be shed. The Mutants’ Union is the power that made rocks roll and attack, and the other factions responded quickly. The New Era begins, the era of war…
The New Era, a standalone expansion for 51st State, contains more than 80 new cards and a new, fifth faction – The Hegemony, a violent band of criminals. New rules for direct interaction allow players to invade and sign deals with opponents’ locations. New options and decisions have opened for players. The game is aggressive and even more engaging than 51st State.
Players: 2-4 | Ages: 12+ | 60 minutes
MSRP: $54.99
Tags
51st State Eagle-Gryphon Games Portal Tabletop Gaming The New Era