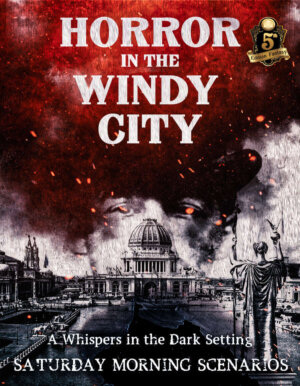 A new supplement for the 5E driven Whispers in the Dark RPG is available from Saturday Morning Scenarios. Horror in the Windy City transports GMs and players to 19th century Chicago where death stalks the Colombian Exposition. You can score the 339 page PDF at DriveThruRPG for $19.99.

Horror in the Windy City brings the excitement, intrigue, and beautiful chaos of the time period to your table using the 5e rules you already know as adapted by the acclaimed Whispers in the Dark RPG written and developed by Matt Corley and M.T. Black.

Within this product you’ll find two books: Horror in the Windy City, a full-length RPG campaign sourcebook expanding the Whispers in the Dark RPG universe, and a novella, The Devil’s City, written by Bram Stoker award winner Sara Tantlinger and Matt Corley. Whispers in the Dark is compatible with the 5th edition of the world’s oldest rpg and set in a world adjacent to our own. The books can be enjoyed independently, but when conjoined they offer the players, readers, and game masters a truly immersive experience.

The beautifully illustrated 250+ page book is a fully realized campaign sourcebook covering Chicago in the latter half of the 19th century with new rules, backgrounds, a new alignment system, NPCs, scenarios, and more. In short, it’s everything you’ll need to take your party of investigators to Chicago. It will be up to them to find their way out.

HitWC begins with an essay from Dr. Robert Greene detailing POC in the late 19th century. Afterwards it reveals the timeline of events that led from Chicago’s founding through 1899. Next up are the major neighborhoods and locales of the city, and finally the social clubs, secret societies and criminal organizations that call Chicago home. Throughout are dozens of scenario hooks, statblocks, and informative sidebars.

No book on late 19th century Chicago would be complete without including H.H. Holmes and his infamous Murder Hotel. Holmes and his allies are explored in depth; the hotel is fully mapped and described in exquisite detail.

The Devil’s City introduces five unfortunates stalked, captured, and experimented upon by Holmes. In the final section of HitWC your players are able to assume the roles of those folks as they seek escape Holmes and his domain. Each character from The Devil’s City has a full page illustration and a character sheet for the players and GM to begin play with minimal prep time.