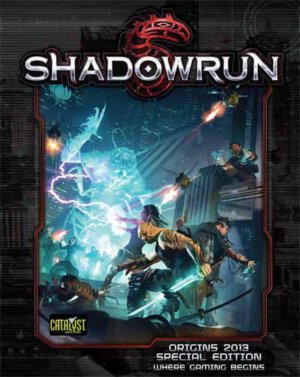 Catalyst Game Labs has announced they’ll have a limited number of the brand new Shadowrun 5th Edition rules available as a special print run only at this year’s Origins Game Fair. I’m sure the new edition is going to be a hit and this will certainly fly out of the Catalyst booth!

On December 21st, 2012, Catalyst Game Labs announced the Year of Shadowrun, the most ambitious release of games for Shadowrun in its almost twenty-five year history. With convention season set to begin, it is time to start getting these games to the players and fans.

The cornerstone of the Year of Shadowrun is the release of the Fifth Edition of the tabletop roleplaying game. While the planned spring release for Fifth Edition has become a summer release, Catalyst Game Labs wants to offer a special opportunity for the convention-going Shadowrun fans that have supported this seminal universe for decades.

As the Origins Game Fair kicks off the convention season during the Year of Shadowrun, Catalyst will release limited quantities of a Origins 2013 Special Edition printing of the soon-to-be-published Shadowrun, Fifth Edition. This softcover version exactly mirrors the final hardcover printing, with the exception of not featuring the two foldout sections of artwork nor the Shadowrun Online marketing code.

Come to the Catalyst Game Labs booth 601 at the Origins Game Fair and be the first to purchase the best edition yet of the brilliant Shadowrun RPG.