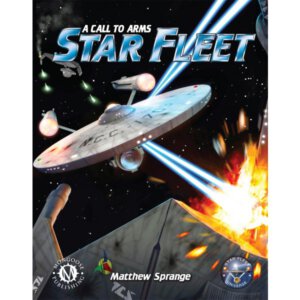 A game that seem to hearken back to the legendary Star Fleet Battles, A Call to Arms: Star Fleet is a game of space combat in the Star Fleet Universe. Throughout humanity’s space-age history, the Federation has come under pressure from many enemies. Now you can play out these confrontations on the tabletop with entire fleets drawn from the Federation, Klingon Empire, Romulan Empire or any one of the many other fleets that range across the galaxy.

From skirmishes involving lone destroyers to the clashing of large fleets against their bitterest rivals, A Call to Arms: Star Fleet is your ticket to exciting battles that take place in the depths of space.

This is a new Star Trek Universe miniatures game from Mongoose, with the Federation and Klingon fleet miniature boxed sets due out any day now, according to the mongoose website. The rules are a mere 22 ₤ or about $35.00.

Although, Star Fleet was (will be) formed with peaceful exploration in mind…