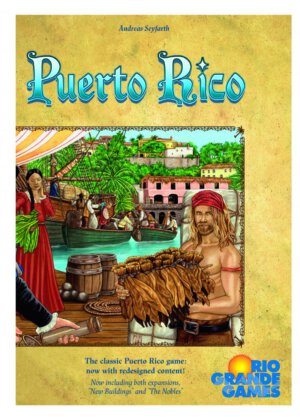 Rio Grande is about to release a deluxe and updated edition of the classic board game Puerto Rico. Previously released expansions plus new artwork added to the core raise the bar on what is already one of the top ranked games of all time. The game is for two to five players, ages 13+, plays in 90-150 minutes, and will carry an MSRP of $54.95 when it arrives on August 20th.

A new, deluxe edition of the classic game Puerto Rico is now available for the first time! It’s a fresh new look for this top-selling title! This deluxe edition includes the Puerto Rico base game, the New Buildings expansion, and the Nobles expansion; it features new cover and art as well as dual-sided buildings with alternate artwork.

Which roles will you play in the new world—prospector, captain, mayor, trader, settler, craftsman, or builder? Will you own the most prosperous plantations? Will you build the most valuable buildings? You have but one goal: Achieve the greatest prosperity and highest respect by earning the most victory points.