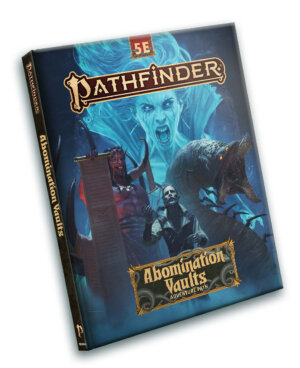 Paizo Inc has revealed the popular Pathfinder adventure path Abomination Vaults is coming to 5th Edition Dungeons & Dragons this Fall. The hardcover will collect all three chapters of the horror-centric campaign in one volume. the release date is set for this October and the book will carry an MSRP of $59.99.

At Paizo, we have a lot of confidence in our adventures. We’ve been crafting phenomenal campaigns for many years, and the Pathfinder Second Edition rules have only helped us make more. The Abomination Vaults Adventure Path has been one of our best campaigns, and our fans love it. But a lot more gamers all over the world play the newest edition of the world’s oldest RPG, and we wanted to show them how great Paizo’s Adventure Paths can be, too.

When the mysterious Gauntlight, an eerie landlocked lighthouse, glows with baleful light, the people of Otari know something terrible is beginning. Evil stirs in the depths of the Abomination Vaults, a sprawling dungeon where a wicked sorcerer attempted to raise an army of monsters hundreds of years ago. The town’s newest heroes must venture into a sprawling dungeon filled with beasts and traps to prevent a spiteful spellcaster from rising again!

This complete compilation of the original Adventure Path campaign has been adapted to the newest version of the world’s oldest RPG. You’ve heard about the quality and depth of Pathfinder campaigns for years—now explore the Abomination Vaults yourself without having to learn a new game system!

MIDNIGHT – Legacy of Darkness Has Arrived for 5E