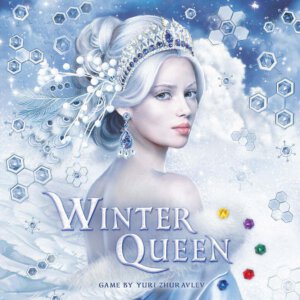 An interesting looking abstract board game is arriving next month from CrowD Games. In Winter Queen, players will compete casting spells in order to be named the queen’s key advisor. The game is for two to four players, ages 10+, plays in around 30 minutes, and will carry an MSRP of $39.00 when it arrives June 16th.

The magical contest is about to begin! Once a year the Winter Queen enchants the snow in her Queendom, turning it into shining crystals ablaze with the colors of the northern lights. Wizards use the enchanted crystals to weave magical spells that will protect the Queendom from woe and misfortune and earn the recognition of its citizens.

Winter Queen — an abstract strategy game from Yuri Zhuravlev (Space Explorers, Viceroy). As a wizard in the Winter Queen’s annual competition, you cast spells and vie to claim the title of the Queen’s Key Advisor.

During your turn, you draft crystals and place them on the game map board known as the Queendom, thereby creating beautiful colorful patterns and gathering Spell Books. Alternatively, you may place crystals on your Spell Books to ignite their magical powers.

When you are ready, you may activate your Spell Books to produce spells and gather victory points in the form of golden coins. The wizard who has the most gold by the end of the game wins the contest and becomes the Queen’s new Key Advisor.

Winter Queen is fast to play. Its rules can be explained in 5 minutes. It shines as a family game because it is easily accessible for all players and has stunning components.

At the same time, Winter Queen provides enough depth to create an ultimate challenge for experienced players. The game has a high degree of player interaction and allows for a lot of strategical decision.