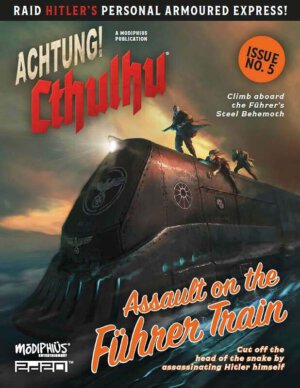 Modiphius Entertainment has released the latest adventure for Achtung! Cthulhu 2D20. Take up the resistance and aim to assassinate Hitler himself in Assault on the Fuhrer Train. The 52 page adventure is available in PDF at DriveThruRPG for $10.00.

It is November 1944 and as winter descends, the Allied advance rumbles to a halt on the borders of Fortress Germany. The US Army and German defenders settle down in a stalemate as they watch each warily across the Siegfried Line.

In just a few short days Operation Watch on the Rhine, or the Battle of the Bulge as history will come to know it, will be launched, but other forces are also at play in the snowy Ardennes.

Credible intelligence reaches a local resistance cell that an armoured train which contains the Führer himself, is heading toward a secret Black Sun and Nachtwölfe facility deep in the heart of the forest.

With time pressing, resistance leader Marta Archambaud seizes her chance and decides to gamble on a covert raid, hoping to clamber aboard, sweep through the train, and cut off the head of the snake by assassinating Hitler himself.

It is a dangerous, possibly even foolhardy mission and the odds are stacked against her, but Marta and four brave colleagues are prepared to risk all, for if they succeed, they can bring the war to a premature conclusion saving millions of lives.

But is this a genuine chance to kill the Führer or a carefully baited trap designed to draw the resistance out and lure them to their deaths? Find out in this thrilling mission!