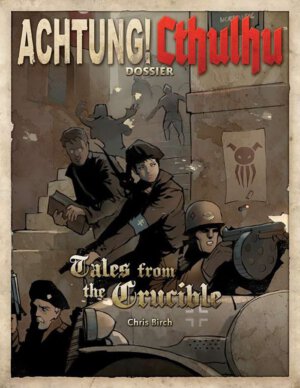 As if saving loads of dough with the Achtung! Cthulhu PDF Lovers Collection wasn’t enough, Modiphius Entertainment also has some other Lovecraftian Mythos freebies currently available. First is the newly revised Tales from The Crucible, a dossier of eight stalwart heroes ready to battle the Axis and more eldrich foes of the Secret War. Second is the adventure A Light on the Mountain which can be downloaded for free if you sign up for the living campaign at the Modiphuis website. Be sure to take your Achtung! Cthulhu tales to new heights with these giveaways while they last!

About Tales from The Crucible:

Achtung! Cthulhu is a world packed full of heroes, and this brand new revised edition of Tales from the Crucible features eight individuals who have well and truly seized their moment; eight drawn into the chaos of the Secret War, whose very actions are instrumental in giving Section M, Majestic and the Allies a fighting chance against the insidious power of The Order of the Black Sun and Nachtwölfe.

The iconic heroes of Achtung! Cthulhu detailed herein: Professor Richard Deadman, Captain Eric “Badger” Harris, Ariane Dubois, Natalya Petrova and Corporal Akhee “The Eye” Singh, have been revised and updated with fuller, more detailed back stories and this edition also features two brand new heroes, “Mad” Jack McMasters and Corporal Liebowitz, to help you tip the balance in the fight against the might of the Nazi war machine.

All have been fully statted up for both sixth and seventh edition Call of Cthulhu with a full range of skills, weapons and equipment and these powerful individuals are ready to use as part of existing campaigns, or to kick off brand new ones. Whether as one-off guest stars, or ongoing heroes who’ll become an integral part of your Secret War experience, these brave, resourceful and in some cases, downright dangerous individuals, are the true heroes of the Secret War.