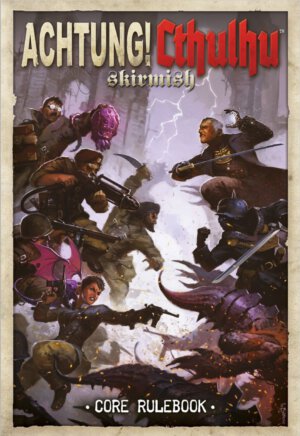 Gamers can now bring the WWII/Cthulhu Mythos mashup action of Achtung! Cthulhu to their miniatures table with the release of the Achtung! Cthulhu Skirmish core rule book. Modiphius Entertainment has built upon the Dystopian Legions 2.0 system, from Spartan Games, in order to present fast paced battles within the Achtung! Cthulhu universe. The rules can be used with any 28mm figures, including the currently available line of Modiphius monstrosities. You can order the physical core book (including a free PDF) through Modiphius or grab the electronic edition through our friends at DriveThruRPG.

Remember any purchase through DriveThru helps support The Gaming Gang too!

Set around the events of ‘the Secret War’ Achtung! Cthulhu Skirmish introduces players to the terrifying conflict fought to stop the sorcerous Nazi cult of the Black Sun from unleashing a tide of Mythos horrors against the Allies. Achtung! Cthulhu Skirmish: Rise of the Black Sun is the title of the first wave of releases during 2016 which will complete a whole story arc set around the first battles fought by the secretive Allied forces Section M, set up by the British to combat the Mythos threat and their US counterparts Majestic.
Arrayed against them are the powerful forces of Exarch Weissler’s Black Sun, who as well as conventional troops and weapons can bring devastating magical power to the battlefield, summon ancient and terrible creatures like the Servitors of Nyarlathotep, as well as powerful allies such as the Deep Ones and Mi-Go.
Take command of brave Allied forces like Badger’s Commandos and the Pathfinder Demon Hunters alongside historical army units, and lead them to victory against the Axis hordes. Deploy special hero units like Sgt Brandon Carter, Professor Richard Deadman or Ariane Dubois to take on the might of the Nazi war machine.
As the Axis, strike terror into your opponents by commanding the sorcerous Black Sun and their Mythos allies, bringing new levels of fear onto the battlefield. Call on the terrifying Deep One War Party or let the unholy Servitors of Nyarlathotep supplement your forces and crush the Allied threat.
Achtung! Cthulhu Skirmish is powered by Spartan Games’ Dystopian Legions 2.0 rules set (re-written by Matthew Hope (Relic Knights, AE-WWII, Wrath of Kings, Sedition Wars) Nick Fallon and John Houlihan. 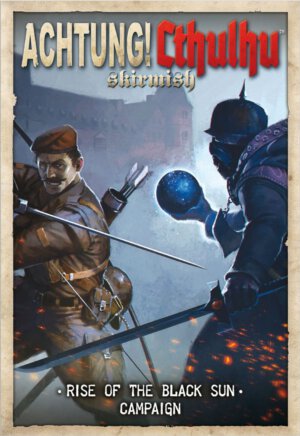 The game allows for fast playing battles from small skirmishes up to full scale conflicts. Modiphius has added new rules for Mythos powers, creatures, artefacts and spells to allow players to experience the full flavour and terror of the Achtung! Cthulhu universe with their heroes and troops. The range is designed to work alongside other popular 28mm miniature lines.
Achtung! Cthulhu Skirmish Rules Feature:
We hope you’ll take a chance to open up an explosive new front for the Secret War and to see the full range of Achtung! Cthulhu Skirmish, miniatures and it’s first major campaign Rise of the Black Sun, head on over to our Achtung! Cthulhu Collection right now.
Tags
Achtung Cthulhu Skirmish Dystopian Legions Modiphius Entertainment Spartan Games

First Look at Monsters of the Wilderness: Oswald’s Curse on The Gaming Gang Dispatch #783