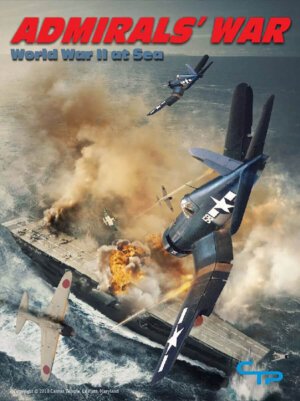 The Kickstarter for Admirals’ War: World War II at Sea has passed its funding goal for Canvas Temple Publishing. This new edition of the well received Pacific Theater wargame will also feature an expansion to the core game. The game is for two to four players and you can reserve a copy for a $74.00 pledge through September 27th with an expected delivery of July 2021.

This project is for a reprinting of Admirals’ War: World War II at Sea and a new expansion that incorporates the Black Sea as well as two new counter-sheets full of new ships. AW has been Canvas Temple Publishing’s most successful game to date, and the first edition of the game sold out in a matter of weeks. Conditions are now right for us to bring you this campaign to reprint this game plus a new expansion for all those who missed it the first time. But for a few minor corrections, this base game is identical to the original, with mounted maps (but without the oversized paper maps that were included int he original). However, the additional expansion offers a new Black Sea map, loads of new ship classes, a deck of “Section 41” Playing Cards, and new Advanced U-Boat rules!

Admirals’ War: World War II at Sea (AW)  is a board game recreation of the strategic naval situation in WWII  from the early months of the Atlantic war to the decisive Battle of the  Philippine Sea in late 1944. All the major combat ships in the Axis and  Allied navies are portrayed in the game in a simple (but not simplistic)  simulation of the war on a strategic level with most of the tactical  details represented by simple game mechanics. The resulting game is  fast-paced and fun to play, while remaining true to history.

Much of AW has some similarity to the mechanics used in Avalon Hill’s  classic game Victory in The Pacific (VITP), applying a modern  application to the sea wars in both the Atlantic and the Pacific. This  game combines both theaters into one game.

Players familiar with these older titles will immediately notice that  the map-board representing the Pacific has some similarities to its  predecessor, whereas the map for the Atlantic theater has greatly  changed. This was done to more seamlessly combine the mechanics of the  two games, and to better reflect the nature of the Atlantic naval fighting.